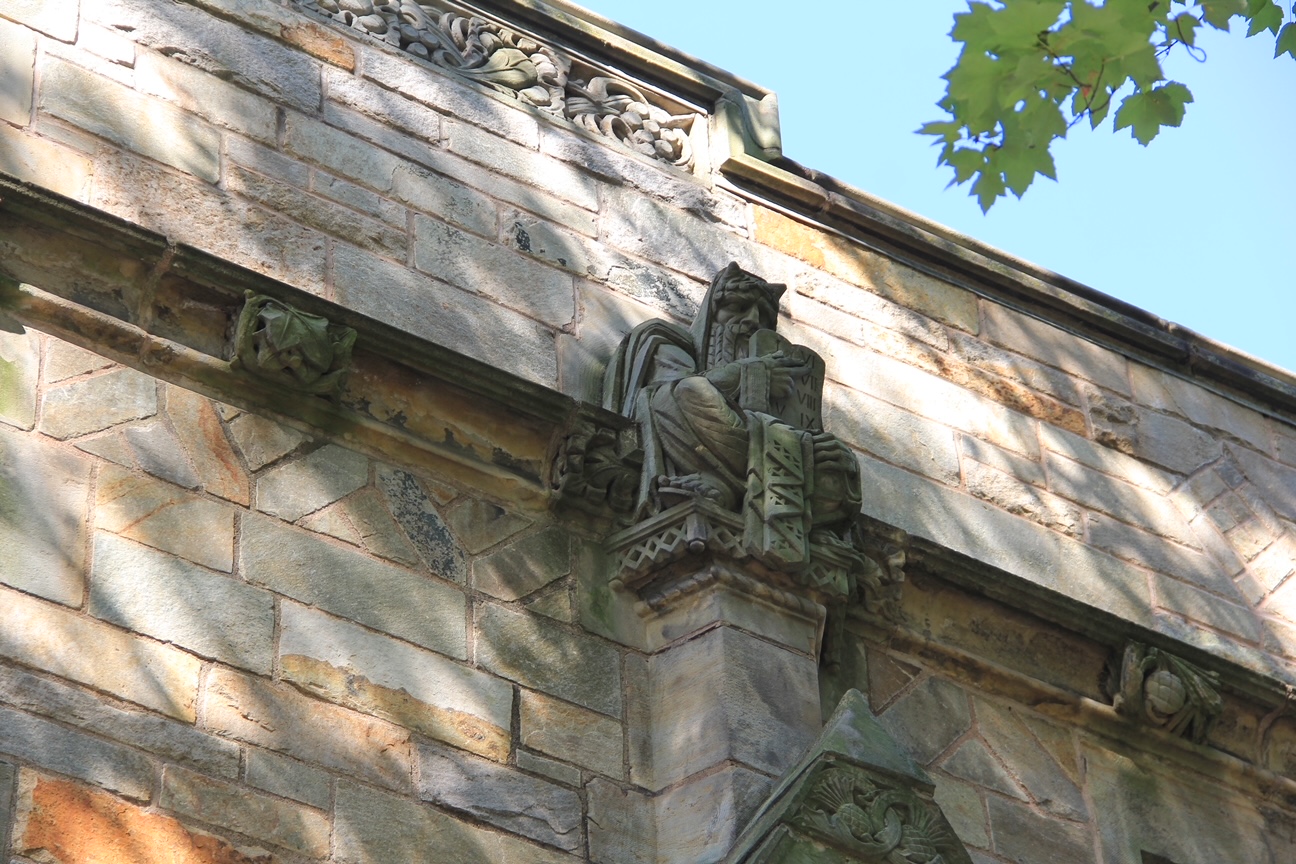 (October 19, 2021 / JNS) Anti-Semitic and racist graffiti uncovered on the Yale University campus in recent weeks has made New Haven a less favorable haven for the community’s Jewish population. And these were not isolated incidents.

In less than two years, synagogues have been ransacked, false bomb threats have been thrown at Jewish community centers, and a Chabad rabbi has been robbed and beaten outside his own synagogue.

Exactly two years ago, anti-Semitic graffiti was found scrawled on the steps of Yale Law School. Arrests were made and a declaration of solidarity was issued by Yale President Peter Salovey, who reaffirmed his commitment to “fostering a diverse and inclusive community”.

Such statements can often look like this: statements. Significant change will not happen until concrete action is taken. Yale can start by tackling an offensive century-old piece of architecture on one of the school’s most iconic buildings that has escaped scrutiny.

Cross campus is the beating heart of the Yale student world. In a pre-pandemic world, the quad campus would be perpetually invaded by flows of students and tourists.

The university’s sprawling Gothic centerpiece, the Sterling Memorial Library, is flanked by the Quad, which houses over 2.5 million books and some 3,300 stained glass windows. Tucked away atop one corner of the library are 15 buttresses which, according to a 1930 study Yale University Library Gazette article, are “figures representative of the areas of knowledge covered by the classification of library contents”.

Socrates is perched there to represent the study of philosophy; Shakespeare for literature; Bach for music; Newton for physics; Leonardo da Vinci for the fine arts; Adam Smith for the economy; and Moses for religion. Great idea, right?

The problem is, the college Moses, holding the Ten Commandments, has horns sticking out of his head. And the library walls – the university’s symbol of knowledge and truth – do not explain why this is so.

The anti-Semitic attacks in New Haven are of course not the result of the Horned Moses, but if Yale is to demonstrate its commitment to fostering a hate-free campus beyond circulating prepackaged statements of dismay and unity, it should start with look in the mirror.

The university has had ample opportunity to address the Horned Moses, not necessarily by removing him, but at least providing historical context to remind passers-by that Jewish men do not cover their heads with a kippah to keep their horns at bay.

One of the university’s committees is even called the Committee on Art in Public Spaces, created to advise the president on the “many works of art located in the public spaces of Yale,” but Moses didn’t didn’t seem to make the cut.

The best-known rendering of a horned Moses is the 16th-century statue by Michelangelo, which now stands in the Church of San Pietro in Vincoli in Rome as part of the mausoleum of Pope Julius II. The horns of Moses have traditionally been explained following a translation error by Saint Jerome, who interpreted the Hebrew word keren as “horn” rather than “ray of light”.

“When Moses came down from Mount Sinai with the two tablets of the law of the covenant in his hands, he did not know that his face was radiant because he had spoken with the Lord. “

“I was naive to think that the last place I would see an anti-Semitic performance of Moshe in a millennium would be the crown jewel of the Yale campus, the Sterling Memorial Library,” said Cameron Frostbaum, a theater management student. from Yale, currently on leave. to study in Jerusalem, who noticed the statue while walking on campus.

He added that “the easy thing to do would be to have the statue altered or taken apart. But it’s a part of Yale’s story that people should be aware of, as we see Jews experiencing harassment and anti-Semitic incidents at alarming rates all over the United States, and particularly in New Haven.

Yale has in the past altered some of its controversial architecture. In 2017, the university hid part of a stone sculpture outside the Sterling Library at Yale that showed a Puritan pointing a gun at the head of a Native American. But erasing history is not exactly the best tool for remembering blatant forms of fanaticism.

For Meir Chaim Posner, a Yale Chabad rabbi whose colleague, Shua Rosenstein, was beaten and robbed outside of Chabad Synagogue in April 2020, the inconsistency in how Yale has handled art or Problematic architecture on campus is the main point of contention.

“It is important to provide context to these portrayals and the anti-Semitic tropes they propagate,” said Posner, who has no connection with the author, adding that he is “not in the camp that supports removing the Moses in question, but do condemn the fact that he is being ignored.

Stephen Bertman, Emeritus Professor of Languages, Literature and Culture at the Canadian University of Windsor, also noted: “These works of art must be preserved as long as a conscious effort is made to inform the viewer of any lies they are making. might otherwise perpetuate. Such works of art that distort the story should be accompanied by captions or commentaries that anticipate and serve to correct initial and incorrect impressions that an uninformed viewer may take from them.

In response to calls to demolish Nelson’s Column in London for supporting slavery, Sir Roy Strong, art historian and former director of the Victoria and Albert Museum, wrote in a 2017 London Times column, “Once you start to rewrite history on this scale, there will be no more statue or historic house standing… The past is the past. You cannot rewrite history.

History and architecture can be powerful reminders of human flaws, and the best history lessons can often be learned by some of the most nefarious characters of the past. Removing a significant part of Yale history doesn’t necessarily help, and it certainly doesn’t do much to prevent the continued hatred of Jews. However, the Yale Decorative Moses is not a historical monument, nor is it on display in a museum where there is any possibility of explanation.

Yale isn’t the only American university to house tormented depictions of Moses. A towering statue of a horned Moses, with his index finger pointing upward to indicate that there is only one God, also stands outside the Hesburgh Library at the University of Notre Dame , despite claims from undergraduates that the statue, which is also not sufficiently contextualized, has helped perpetuate anti-Semitic tropes on campus.

Large, crooked noses and horns are characteristics that anti-Semites have classically attributed to Jews. Such characteristics were regularly used by the Nazis in the 1930s to demonize Jews. And more recently, in 2019, anti-Semitic leaflets featuring Jewish men with enlarged noses and horns were found all over Newton, Massachusetts, allegedly distributed by far-right neo-Nazi group The Daily Stormer.

Yale, like Notre Dame, should do better if they are serious about creating a campus culture devoid of any form of hate.

Jonathan Harounoff, a former New Haven resident, is a New York-based British analyst and journalist. He is also a graduate of the Columbia Journalism School and an alumnus of Cambridge and Harvard universities.

Stephanie Posner is a policy professional and a recent master’s student at Yale University School of Management and the Jackson Institute of Global Affairs. She is also a former Kennedy Fellow at Harvard University and holds a BA in Classics from the University of Cambridge.