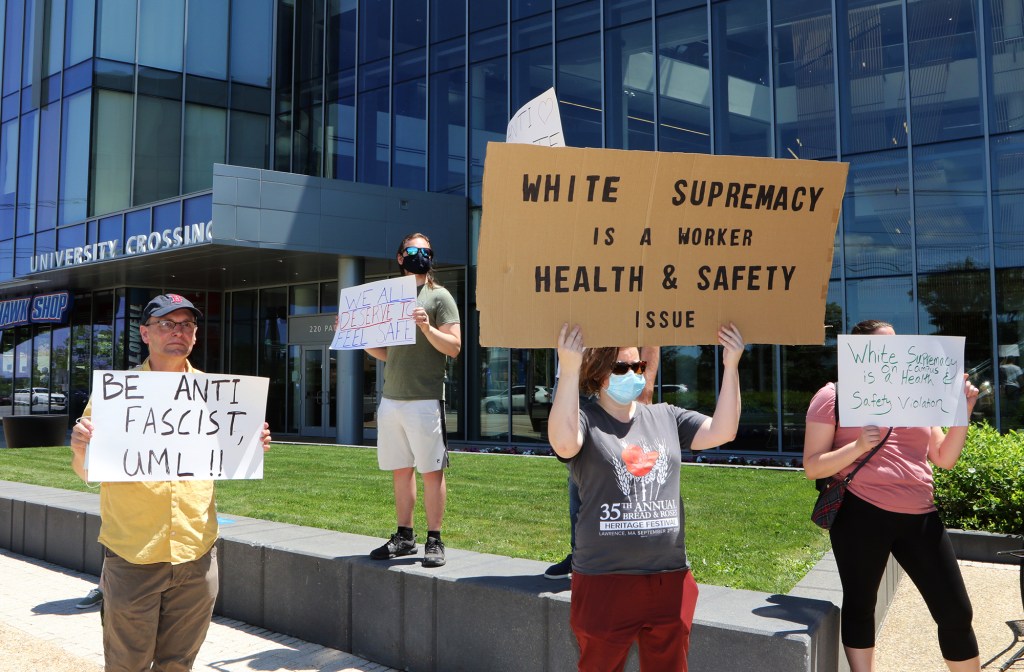 LOWELL – Students at UMass Lowell gathered outside University Crossing on Pawtucket Street on Thursday to protest the dismissal of their comrade Liam MacNeil, who is believed to be a member of the neo-Nazi organization NSC-131.

Allegations about MacNeil’s involvement with the neo-Nazi organization have spread online throughout the past month. Recently, a petition began circulating online calling for MacNeil’s expulsion from college. Thursday evening, the petition was just below its target of 10,000 signatures.

The petition and subsequent protest appear to be the result of many comments MacNeil made during a livestream in May, which originally appeared on the online platform Telegram. The full video and offensive highlights were then shared on Twitter by multiple accounts, including Waltham Night’s Watch.

â€œWe were told that legality preceded the student code of conduct and that is why no action was taken,â€ said a graduate student who spoke to the gathered protesters. “This is unacceptable. It should not come to the point of requiring an arrest for taking action against a hateful person and someone with an ideology whose sole purpose is to eliminate other groups of people.

Tom Estabrook, a member of the labor coalition health and safety committee, was one of the non-students to speak.

“In my mind, I think if the university were really serious about this, they would prepare to organize courses and educational events even in the summer to fight against fascism and white supremacy in the United States and how that is. slips on campus, too, and how we have to stop it, â€Estabrook said.

A student who spoke up warned of public disgrace and MacNeil’s expulsion, fearing it would further radicalize him and push him to do worse things. The student suggested that some of the radicalization MacNeil has already experienced may be the result of unresolved trauma.

Another student agreed to take decisive action to have MacNeil banned from campus.

â€œWe want to know how the university is going to protect us as students and employees,â€ they said.

After the brief speeches, the protesters erupted into several conversations, including “Hey, hey, ho, ho, the Nazi scum must go” and “[Expletive] all the Nazi scum ‘outside the building, which houses the school’s administrative offices. A man was beating on a snare drum as the vocals got louder.

â€œWe pay to go to this school,â€ one student shouted into a megaphone to several people watching from the third floor.

Protesters entered the building hoping to speak with Chancellor Jacquie Moloney, but were told she was not present. From there, they continued their chants as they carried signs to the Richard P. Howe Bridge on University Avenue.

In response to Thursday’s protests, the university issued a statement saying, â€œUMass Lowell stands with our students and employees to speak out against white supremacy, all forms of hate speech, intimidation and potential threats against violence. safe and inclusive community that we, as a campus, have been working tirelessly to create and sustain. While we cannot banish hatred from the hearts and minds of every individual, we will continue to speak out strongly against it and overwhelm hate messages with messages of respect, fairness, justice and inclusion. .

During the live video, MacNeil is seen sitting next to Chris Hood, who is widely regarded as the leader and founder of the hate group. In the video, MacNeil brags about the lack of consequences for his actions.

While Hood encourages like-minded people to bully and harass students who â€œmix the racesâ€ at parties on their college campuses, MacNeil smiles and offers what could be interpreted as endorsement.

â€œWe’re kind of like a brotherhood, but racist,â€ MacNeil said.

â€œIf you want to create a brotherhood, we suggest the name Kappa Kappa Kappa,â€ he added, referring to the letters KKK, which also stands for Ku Klux Klan.

UMass Lowell told The Sun they thoroughly investigate any threats or allegations of harassment, but according to federal law, the details of any specific investigation are confidential.

During the video, Hood refers to members of NSC-131 branding their logo in Nashua, NH. Pepperell.

At one point during the nearly two-hour live broadcast, MacNeil and Hood do what appears to be a Sieg Heil salute, popularized by Adolf Hitler and the Nazi Party. The couple also brag about a recent NSC-131 rally at an unspecified Holocaust memorial. Despite their presence at the memorial, they proudly claim that no one has bothered them.

During the video, Hood said the goal was to continue recruiting like-minded people to NSC-131 to strengthen what he called the “White Defense Force.”

According to the Anti-Defamation League, â€œNSC members see themselves as soldiers fighting a war against a hostile Jewish-controlled system that is deliberately plotting the extinction of the white race. Their objective is to form an underground network of white men ready to fight against their perceived enemies through localized direct actions.

NSC is the abbreviation for National Socialist Club, and 131 is the alphanumeric code for anti-communist action. The hate group participated in the Capitol riots of January 6, something its founder boasted of.

In response to the petition, UMass Lowell sent a statement to The Sun saying, â€œUMass Lowell is aware of the petition and is proud to join all who speak out against racist and hateful language. The university’s core values â€‹â€‹reject all acts of discrimination and make the cultural diversity of our campus a fundamental institutional strength.

The statement continued, â€œâ€¦ while the First Amendment protects odious and hate speech, it also guarantees our university community the right to speak out firmly against it and to overwhelm messages of hate with messages of respect, equity, justice and inclusion.

For some UMass Lowell students, speaking on condition of anonymity, the college’s response was insufficient.

â€œI know there are students who are quite outraged and don’t feel comfortable going back to class knowing that they will be on campus,â€ said one student.

A student believes the college’s response and communication has been inadequate given their concerns for safety and the diversity of the population. The university shared a post on Instagram as well as an email denouncing the hate and re-engaging inclusion efforts.

â€œI know students who have been kicked out for a lot less than that,â€ the student said. â€œI understand the First Amendment and we have the right to say whatever we want, but that does not mean that there are no consequences for our words and actions. When MacNeil and his group threaten students, why doesn’t the school react more seriously? “

The Sun attempted to contact MacNeil through his student email, but did not receive a response.

Aaron Curtis contributed to this report.

What is an advertising ID on Android? How to reset it to limit ads on your phone – gadgets to use