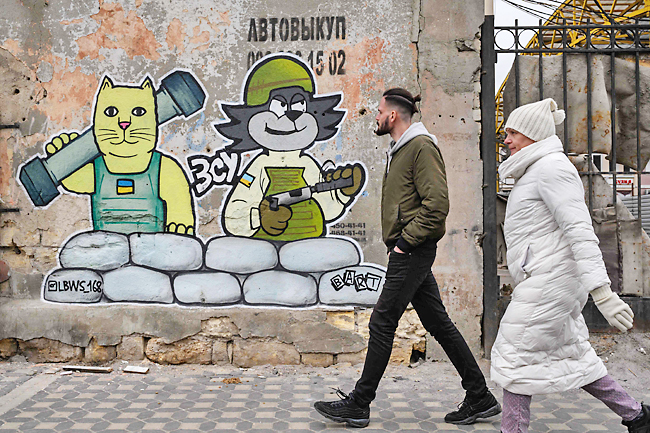 ODESSA, UKRAINE (AFP) – Painted on a city wall in Odessa, southern Ukraine, a blue cat smiles triumphantly as it stomps on a pile of burning Russian planes.

In a show of reckless defiance, a Ukrainian graffiti art collective has sprayed dozens of other such felines on the walls of the Black Sea port since the war began.

“Odessa is a port city, so there are a lot of cats. With the war they had to become patriots,” said Matroskin, one of the street performers in the group which calls itself LBWS.

“It’s the only option we have. Some are volunteers, some are fighting on the front line. Some are cheering with cats,” the 32-year-old said.

It’s not the sophisticated kind of street art made famous by Britain’s Banksy, whose works have dotted walls around the world and are now fetching exorbitant prices at auction.

It’s more naïve and farcical, but it conveys the message of resistance just as effectively.

Around a Godzilla-like cat annihilating Russian planes are painted the words that have become an unofficial slogan of the resistance to the Russian invasion: “Good evening. We are Ukrainians.

In its attempt to gain control of the Black Sea region, capturing Odessa is a strategic priority for Russia. But the city of a million continues to flaunt its freedom with tongue-in-cheek street art.

The town of Mykolaiv, 130 kilometers to the east, fiercely resisted a Russian offensive in March. Ukrainian forces repelled later Russian attempts to advance beyond the town.

“The Russians, at this point in the war, don’t have the combat power or the logistical support to carry out an attack” on Odessa, he said.

Barros said Russia must use its remaining forces “wisely” and “focus on its objectives” in the Donbass region and the eastern Ukrainian city of Mariupol.

In 50 days of war, less than 10 strikes hit Odessa, mainly causing material damage.
The relatively free life of the people of Odessa seems to reflect the military situation in this part of Ukraine.

Virtually no checkpoints impede movement in the city, except for a few barricades and sandbags near the port, a stark contrast to the death and destruction of besieged Mariupol or the capital kyiv.

It is only with the night curfew that Odessa turns into a ghost town, with the bustling cafe terraces going silent and the crowded roads emptying at 9 p.m. sharp.

“The people of Odessa are not panicking. They are in ‘drive’ mode. They are ready for anything, but I hope it doesn’t come,” said Mikhail Beyzerman, a 59-year-old well-known cultural figure in the city.

Psychologist Alex Krugliachenko has diagnosed a kind of war “denial” in Odessa, as people enjoy small blessings, like drinking a cappuccino or living another day.

“We know what’s going on, how people are suffering in other cities, but we want to share some kind of hope that everything will be okay,” he said.