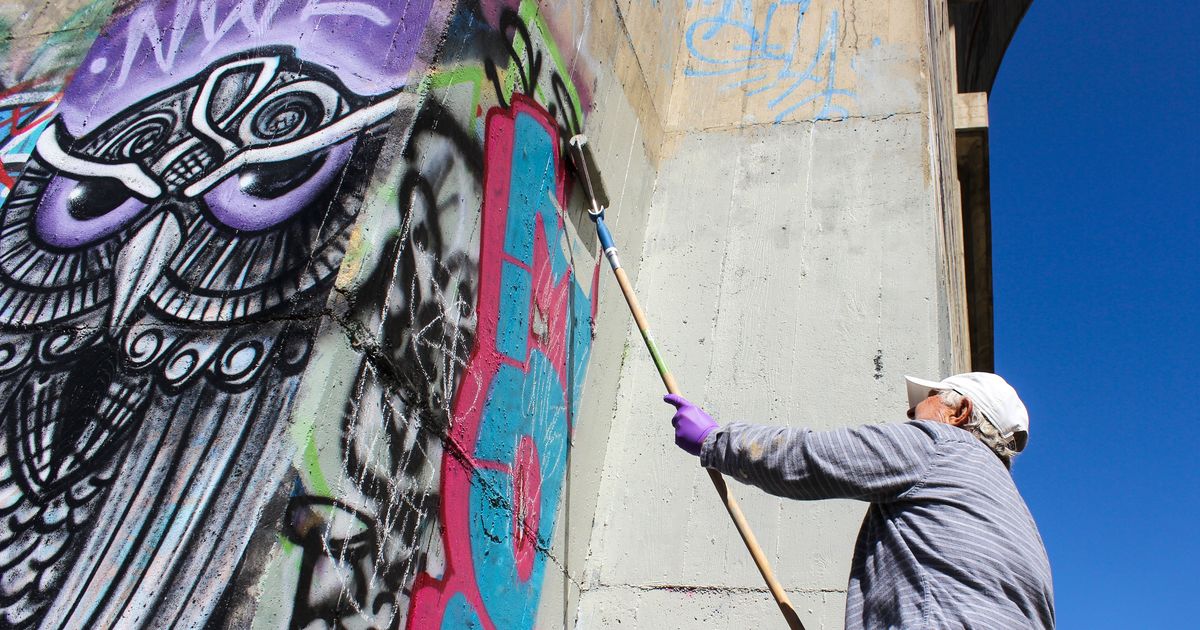 More than 20 volunteers lined Wall Street from Spokane to the heart of downtown Friday morning with paint rollers in their hands and a shared love for the Lilac City.

“This turnout shows people’s resilience to get out there and be part of a team,” said city administrator Johnnie Perkins. “I think everyone just wants to be part of a community, and that’s community spirit, in the broadest sense.”

Anti-graffiti are a new group of volunteers that have their origins in Mayor Nadine Woodward’s desire to clean buildings of unnecessary and sometimes even offensive graffiti.

“Come rain or shine, we’ll be there,” said Luis Garcia, a law enforcement supervisor for the city of Spokane.

The group split up, with one staying on Wall and the other heading for the underpass on Inland Empire Way at Seventh Avenue.

“It’s a problem, a lot of problems downtown, especially working downtown. Some people don’t respect Spokane, so anything we can do to help is important,” Tillett said.

Tillett has lived in Spokane all of her life and appreciates the conscious effort of individual volunteers and other nonprofit organizations in Spokane. Peer Spokane and the Downtown Spokane Clean Team have been shown to support anti-graffiti.

Spokane’s Clean Crew dedicates six days a week to taking care of the streets of Spokane.

“I couldn’t ask for a better team of people to keep the city running, to keep it vibrant. You really realize how much of a community we have in Spokane when we all come together,” said Spokane Clean Team member Nina Volgmann.

“I’ve lived here for almost 40 years and I’m discovering things I didn’t know about my city. We all have the same goals, we always celebrate together,” Gelhaus said.

The group parked on Wall effectively covered over two blocks of graffiti in less than an hour.

On the other side of downtown Spokane, the group stationed at Inland Empire Way was tasked with covering the infamous beacons along Spokane’s underpasses heading north.

In that group was Tamara Larson, a resident of Spokane for 10 years. Larson has recently felt the need to give back to his community and has volunteered with various organizations.

“I left Washington, traveled around the world for 15 years and came back. I’m so proud of who the grassroots people in Washington are. I love our state,” Larson said.

Buddy Meola also finds it rewarding to give back to a town he and his wife have returned to every summer for seven years.

“I’ve been doing this with the city for three years,” Meola said. “It’s one of those things, you never get ahead of yourself. There’s too much !”

Meola said he had already been to the underpass this summer.

“We had a great team here last month, all the stalwarts here, all of that, they’ve already regraffized it,” he said.

While volunteers spend hours covering tags, it only takes a few seconds for an individual to undo their efforts. Meola, however, is motivated to continue volunteering.

“I have time, it gives me the opportunity to give back to my community,” he said.

In just 40 minutes, the group stationed at Inland Empire Way went through more than five gallons of paint.

Graffiti hunters plan to continue their paint nights every other Friday for at least the rest of the summer.

Instructions for the processing of personal data using information technology for the purposes of advertising, marketing or commercial prospecting – (Superintendency of Industry and Commerce, External Circular 006 of 2022, 07, 2022) | Denton