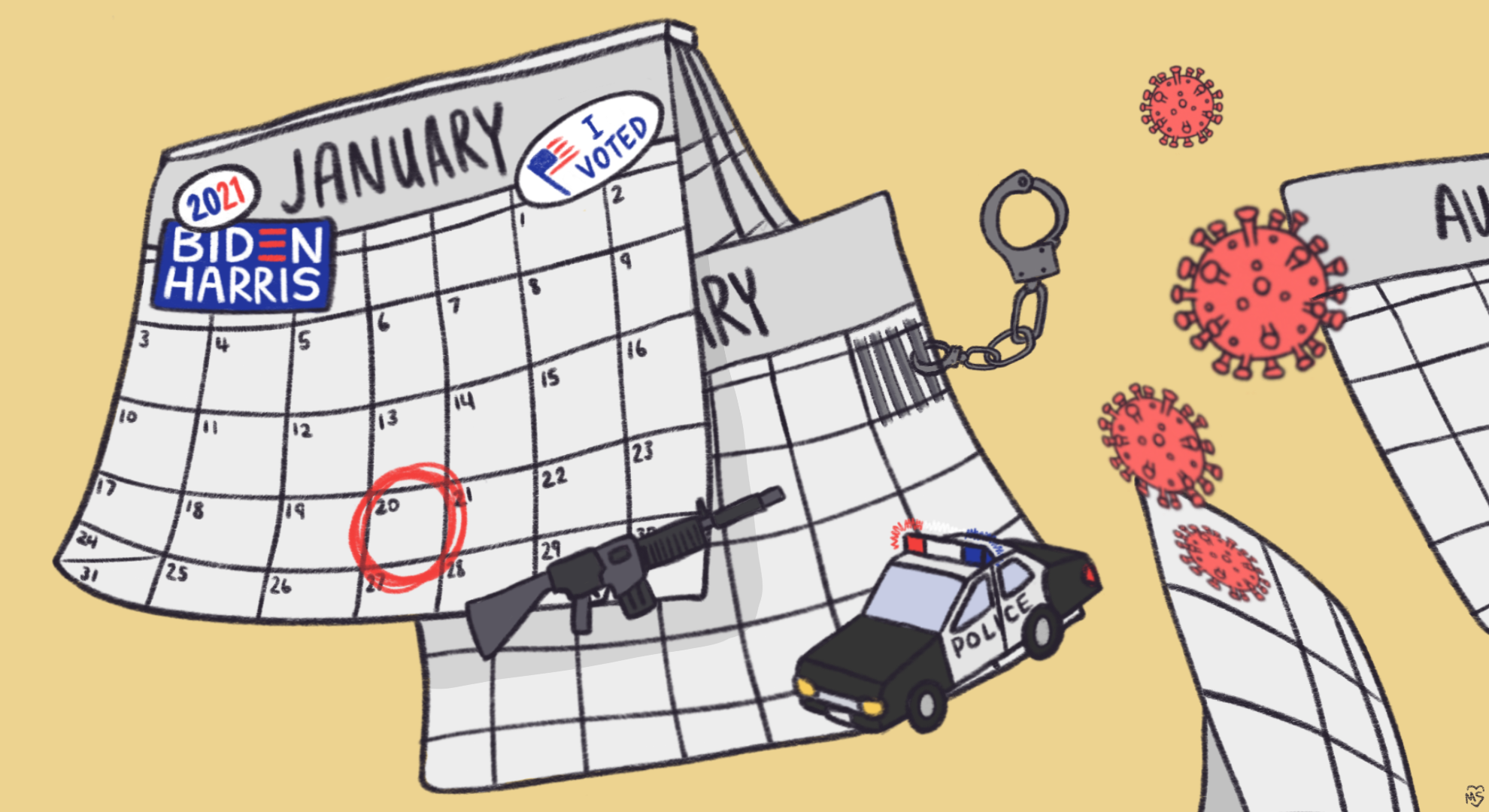 The Normalization of President Biden necropolitics is as new as the sky is blue. Already, I hear the neoliberal return–at– brunchers cheerfully brandishing their rationalizing remarks – their ostentatious replicas of “reform”. Yet what these haughty preachers fail to grasp is the simple fact that the abomination of Biden – sorry, administration, is not a true repudiation of Trump but rather a perpetuation of his legacy…which, of course, was a mere continuation of the Obama administration and his ancestors’ unwavering dedication to the exploitation of capital and the white power structure.

Indeed, in Biden’s first 365 days, we witnessed a grotesque perpetuation of racialized immigration policies. There was a series of children in cages, but the outrage passed. The total number of immigrants in detention centers has increases more than 50%. Mass incarceration remains, as political scientist Siddhant Issar postulates, “an important mechanism by which the state manages surplus populations and the social and economic crises precipitated by neoliberal restructuring. This was undeniably evident in 2021, as the Biden administration delivered more than a million deportations (including the inhuman evictions Haitian asylum seekers). The only corresponding digit which is the millions dollars this administration has spent on funding the police, in addition to the Department of Defense’s continued promotion 1033 program which maliciously weaponizes the police, continuing to endanger the lives of black and brown people across the country.

Last year, Kyle Rittenhouse verdict as the racialized killing of two men has sparked well-justified anger. But I have to ask, where is that energy for the chief executive? Our modern American culture is remarkably prone to idolize our politicians. Not only us streamline these world famous killers of the ruling class, we glorify putting them on a pedestal as if they weren’t indirectly facilitating the same violence we claim to hate (on a larger systematic scale). Rejecting abolition and de-carceral alternatives, we perpetuate our insistent urge to individualize systemic problems. In the face of interpersonal justice, we argue ardently for incarceration rather than assessing material conditions and social contradictions at a larger structural level.

Looking abroad, we have seen a perpetuation of imperialism as imperative, with punishments to Afghanistan and Venezuela and Cuba, and political destabilization attempts on Nicaragua. A perpetuation of AFRICOM, and the militarization of Africa and the Middle East persists, continuing under the guise of “counter-terrorism”. These sadistic sanctions and subversive machinations bring disastrous starvation, economic deprivation and senseless death.

And let’s not forget the perpetuation of our planetary peril, while the gloom of this administration group policies on climate change has only intensified the climate crisis as Biden problems large-scale permits for oil and gas drilling compete that of Trump’s first three years. Not to mention the greed to augment military expenditure (which remains one of the most important contributors to the climate emergency) generated $778 billion for “defense” in the name of “Build Bombs Better” – sorry, “Build Back Better”.

Meanwhile, Biden supporters continue to perpetuate and plaster his soothing reform Strategies as if it were not another rudimentary strategy of the ruling class to temporarily resolve the antagonisms inherent in the capitalist system. Ultimately, none of these policies do anything to alter the material conditions of the working class or resolve the heartbreaking crises of housing and health care, education and the environment, all of which continue to be exacerbated during the pandemic.

You know, the pandemic… in which the Biden presidency has experienced unprecedented levels of death and dismay as we pass 1.35 million cases (registered) (in one day). Despite vaccinations, 2021 has seen Following Deaths from COVID-19 only in 2020. Now the safety precautions that many people took against the coronavirus at the start of the pandemic have been thrown out the window. The pandemic continues, but those of us with privilege simply don’t care as we fall back into crowded parties, stadiums and bars. It seems to me, especially since the new Omicron variant is prolonged, that for some from the start, “putting safety first” through mask mandates, quarantine and other acts of collective care was just a performative political maneuver fabricated by the media apparatus (neo)liberal in opposition to reactionary right-wing sentiments. Clearly, some saw Biden’s victory and the vaccinations as a way to “get back to normal” in more ways than one. Yet, from the day of the inauguration, the pandemic and all the social problems that persisted before his presidency remain endlessly perpetuated, augmented and amplified.

Of course, underlying all of this is the faint collective forgetting that our president, like his predecessors, is a old collaborator and running unconditional sympathizer of the segregationists, a architect of modern mass incarceration, not to mention a alleged aggressor – all of which was widely available information ahead of Election Day.

And while all over the land disjunctive syllogism and the pervasive false liberal-conservative dichotomy might be to blame for the dissonance so, we must now relinquish our misguided allegiance to party politics and American electoralism as a whole.

Like Malcolm X once proclaimed, “Every time you put your weight behind a political party that controls two-thirds of the government and that party can’t deliver on the promise it made to you during election time and you’re stupid enough to walk around in continuing to identify yourself with this party, you are not only an idiot but you are a traitor to your race.

If so, then what can we do? We can start by asking ourselves how we might be actively contributing to harm in our day-to-day lives. What actions could we take that are geared towards the dictates of capital?

We can think more critically and consciously about the media we consume, the brands we support, or the causes we join. We can consider redirecting our career paths away from profit, away from exploitation, thereby reaffirming our commitments to justice by prioritizing the empowerment of all people in our professional pursuits. We might regularly ask ourselves how we can better situate our values ​​and beliefs in favor of liberation in all aspects of our existence.

We can invest in community and collective care, mutual aid revolutionary networks and organizations (like black alliance for peace).

We can usually devote ourselves engaging with groundbreaking readings and radical writings that have been so vigorously suppressed from mainstream discourse.

We can align our artistic passions and political perspectives in ways that push back against capitalist ideology and the white power structure.

MiC columnist Karis Clark can be reached at [email protected]