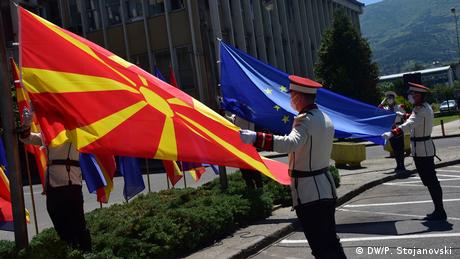 My Europe: Bulgaria vs North Macedonia – is there a way forward? | Taiwan News

There is no rational explanation for the Bulgarian veto on opening accession negotiations with North Macedonia. The nationalists of the old government were there simply to bolster their declining popularity. But why this enthusiastic consensus? The Bulgarians seem to have expected the Macedonians, once “liberated” from Serbian hegemony, to return to them – and were therefore disappointed to find that their neighbors had developed a strong national identity.

The refusal of the Greeks to accept the initial name of the newcomer may well have informed the Bulgarian national ego. But while Athens presented clear conditions in Skopje, Bulgaria’s anger today seems vague and illogical. It sets a dangerous precedent that could well be used to stoke tensions between Serbs and Kosovars, Poles and Ukrainians and all other countries with divergent views on their common history.

North Macedonia’s hopes that the EU will force Bulgaria to lift the veto are overstated: France prefers a deepening of the Union to its enlargement, while far-right parties are skeptical about the admission of country with a large Muslim population, such as North Macedonia.

Which side of the story?

Finding a solution to the stalemate involves a compromise that would allow both sides to claim victory. So what are the Bulgarians’ claims? First, they want their Macedonian neighbors to recognize their Bulgarian origins. In the process, the official formulation of a “common history” was brutally abandoned, the Macedonians accused of stealing Bulgarian history.

The unfortunate amalgamation of historical facts and national identity means that both sides assume that recognition of specific events from the past automatically makes you a Bulgarian or a Macedonian. The new liberal leadership in Sofia has promised to broaden the scope of negotiations. Talks to date have revolved around the Bilateral Commission on History, which has the impossible task of establishing a truth about the past.

Prime Minister Petkov’s plan now is to launch talks on transport, business, culture, security – areas arguably more relevant to the enlargement process. The expert teams are expected to deliver their results by the end of the French presidency in July 2022. The commission of historians has no deadline and is expected to continue working throughout the membership process.

A rather vague Bulgarian request is the prevention of hate speech. Examples range from offensive graffiti on the walls of Skopje to the desecration of the graves of Bulgarian soldiers from World War II. The veto has unsurprisingly heightened feelings of negativity: a recent poll showed that more than 50% of Macedonians consider their eastern neighbor to be a hostile country. The tendency of Bulgarians to label the neighboring nation and its language as “invented” only contributes to mutual animosity.

If there is one problem with the story, it arguably has to do with the profascist regime in Bulgaria – complicit in Nazi crimes – and the early period of Yugoslav communism, when many Yugoslav Macedonian Bulgarians were forcibly assimilated. For now, however, neither country is ready to shoulder its historic guilt and therefore prefers to point fingers.

Sofia’s third complaint concerns human rights. Discrimination against people who identify as Bulgarians in Macedonia can be a serious concern, however, substantial evidence is lacking.

No case has yet been brought before the European Court of Human Rights; the examples cited are generally those of people with dual nationality, such as the mayor of Skopje or the singer in the Eurovision Song Contest, despite the fact that neither of them was effectively prevented from achieving their ambitions.

At the same time, Prime Minister Petkov came under similar pressure to have dual citizenship, this time Canadian.

However, Sofia’s claims are not unfounded. 120,000 citizens of North Macedonia have obtained Bulgarian nationality: 12 times more than the Vlachs who enjoy minority status under the North Macedonian constitution.

And where are the 120,000? Everyone knows the answer: in Western Europe. Bulgarian passports are often acquired by bribing Bulgarian officials and falsifying family documents.

So what if, as expected, only 3,000 people end up identifying as Bulgarians in the 2021 North Macedonian census, which is still being processed? Sofia has the answer: they will have been discriminated against and intimidated.

Getting the Bulgarian minority into the North Macedonian constitution ahead of â€œand the restâ€ may seem easy, but it would require a two-thirds parliamentary majority. Moreover, the Macedonian opposition is sure to retaliate. Things are also uncertain on the Bulgarian side. Recognizing a Bulgarian minority in North Macedonia would imply that the remaining majority is not Bulgarian, thus ending a nationalist dream. With nation and ethnicity closely interwoven in the Balkans, the ethnic question remains highly political.

In the end, the fragile political balance in Sofia could easily be upset by the prospect of new elections, the fourth in a row. Populist Slavi Triffonov, leader of one of the four ruling parties in charge of the Bulgarian Foreign Ministry, recently put forward the following absurd proposal: Bulgaria would lift its veto on condition of being admitted to the Schengen area of â€‹â€‹the ‘EU and abolish it by the United States. of its visa requirement for Bulgarian nationals.

Since when is it possible to blackmail someone by threatening to shoot themselves in the foot?

Ivaylo Ditchev is professor of cultural anthropology at the University of Sofia in Bulgaria. He has been a guest speaker in countries such as Germany, France and the United States.