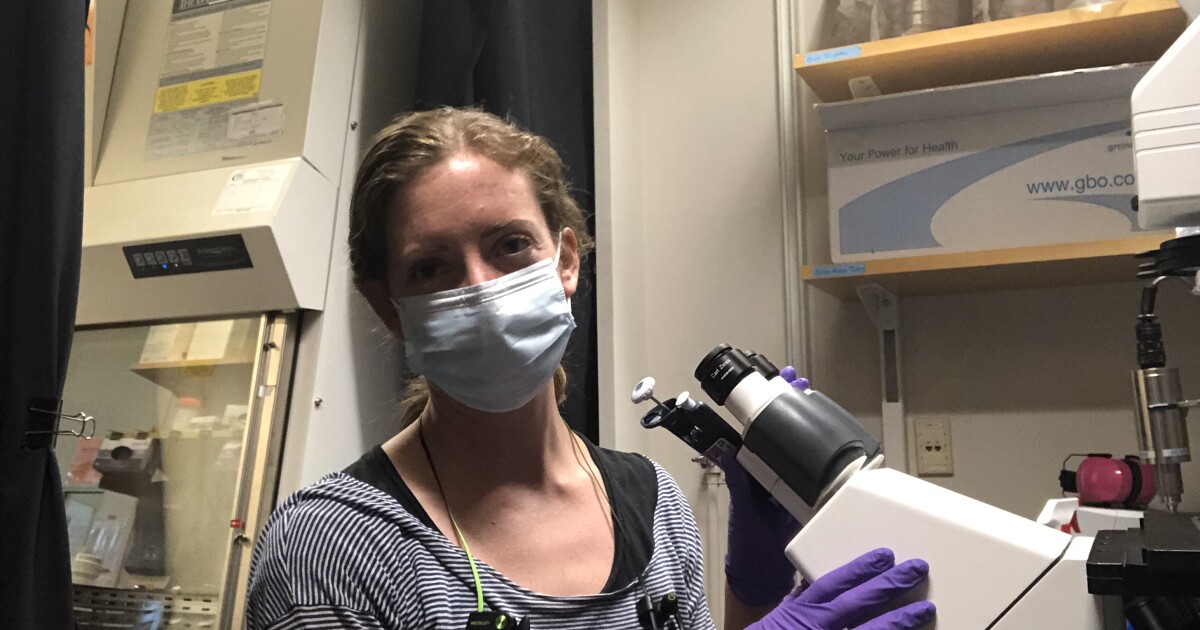 My sister Brigitte Naughton (who is 20 years younger than me) was born and raised in Laguna Beach. Brigitte has traveled the entire Laguna school system, from El Morro to Thurston to Laguna Beach High, where she received several college scholarships. She received her undergraduate degree with honors in Biochemistry and Molecular Biology from UC Santa Barbara, as well as a minor in English Literature, and was the science editor of the academic journal. The head of the English department at UCSB offered to sponsor her for a doctorate. After graduating, Brigitte was hired at Pfizer Oncology in San Diego, where she researched cancer therapies to pay off her student loan debt. She was quickly promoted to Senior Associate Researcher. Her colleagues at Pfizer encouraged her to apply for graduate studies in order to reach her full potential. She applied to the best graduate schools in her field and was accepted into eight highly competitive programs. She is now entering her third year at Yale University, pursuing a PhD in Molecular Biophysics and Biochemistry.

Brigitte illustrates what students in the Laguna Beach School District can accomplish. And now, following a terrible accident, Brigitte needs our help.

Brigitte was recently on a small boat with friends when a wakeboard line broke and a large piece of metal hit her face, the force of it shattered her jaw, broke her teeth and split his tongue. She faces major reconstructive surgeries on her jaw and teeth, nerve damage to her mouth, and complicated surgeries involving internal stitches and two permanent metal plates placed in her jawbone. The ambulance, the first emergency room she was taken to, and all future dental work – including efforts to realign her bite, braces, implants, root canals on injured teeth and potential crowns – are not covered by its Yale insurance.

Despite everything, Brigitte remains focused on her academic goals at Yale. His teachers help him academically; let’s help her financially.

From Brigitte: “I am therefore acknowledging donations received. I was in the hospital for two days and had major reconstructive surgery to repair my broken jaw. I had two metal plates permanently inserted to fix my fractured jaw, in addition to sutures to fix my tongue which was split in half and my chin which was cut. I lack sensation in my lower left chin and lower lip, but the doctor is optimistic that because the nerve was not severed, I might find some sensation in this area. It has been a very difficult time, wondering if I can afford the care I need while focusing on my studies and my lab work. I hope to be able to continue my doctorate and regain the ability to eat and speak normally. I cannot stress enough how grateful I am to those who have helped.

Here is the link to Brigitte’s GoFundMe page: https://www.gofundme.com/f/help-brigitte-naughton-pay-her-medical-bills.

Due to the massive July 4th fireworks display, around 120 animals were taken to the Huntington Beach Wetlands and Wildlife Care Center, Daily Pilot, on July 7th. Animals such as a peregrine falcon, a black heron chick and a gray fox hit by a car, some of the helpless creatures were frightened and injured by the fireworks and noise in the sky. Obviously only humans seem to enjoy the Fourth’s fireworks. If Dr. Doolittle could be summoned he could hear some of the animals’ comments such as, “Who do I bite to breach the chain of command that has the power to take this holiday off the books?” “Could the person responsible for all these loud sounds and colors move his stupid spectacle about 100 miles offshore and let the sharks and whales have their turn for a while?” And finally, “If thoughtless humans are going to take this vacation, ask them to mute all sounds, blacken all bright colors, and get rid of the horrible smells we have to endure that makes them explode, boom.” “Other than that… we’re ready to share our house with you guys.”

An archaic Municipal Improvement Act of 1913, conceived as a vehicle for beneficial community development in the pre-World War I era, has silently turned into a stealthy and ‘under the radar’ strategy to collect tens of millions of dollars in property taxes without the normal rigid safeguards and procedures for voter approval. The City of Newport Beach has mastered the use of this municipal law specifically for underground utilities for the past 20+ years. The strategy is to divide each project into a small Assessment district affecting several hundred homeowners at a time without attracting too much unwanted attention. To date, according to data available on the city’s website, this has been accomplished over 60 times. Due to its impact on a small number of properties at any one time, it attracts little attention from the general public and protests from the dispersed opposition are either ignored by the city or drowned in the cacophony of nonsense being spouted out on NextDoor.

One of those projects, Assessment District 124, is slated for a so-called vote on July 27. Unlike the others, this is an exceptionally large $ 32,815,700 project affecting 966 properties on Balboa Island. The average cost (a property tax euphemistically referred to as “appraisal” under the California Constitution) is $ 34,000 per parcel, if paid as a lump sum. However, by my calculations, if paid over 20 years, the total payment could reach $ 54,000, depending on the bond interest rate in 2023 or 2024.

Now let’s move on to the next vote on Balboa Island on July 27. The ballots, mailed around June 10, are 100% by mail; the list of ballots is managed by a contractor hired by the city. Four weeks after the mailing, it was determined in a private meeting that a number of voters had not yet received their ballots and may not even have been aware of the assessment. that was going to happen to them. This has been a recurring trend on such past polls – as little as 70% voter turnout in many cases – leading to a passage with less than 50% of affected homeowners approving. In addition, the city has no methodology to verify signatures on mail-in ballots, relying solely on the penalty of perjury. Voting, by design and by law via Article II of the California Constitution, is a matter of common knowledge, subjecting participants to potential intimidation and peer pressure.

The city provided several information attachments with the ballots. The attachments lack the usual pleadings for and against the initiative of each of the two camps so that voters can make an informed choice. No contrary opinion was provided with the ballots. There were no hearings or briefings organized by the city on this massive four-year project. The city told us that this obvious lack of transparency and poll integrity is sanctioned by the Municipal Improvement Act of 1913. But the city continues to present itself as an independent and honest arbiter in a nasty feud of its own making, between neighbors duel.

It is high time that the city intervened and protect the inhabitants. But will he do it? Very unlikely given that the creative approach (the fact that landowners voluntarily opt for higher taxes) will give them a practical and healthy subsidy for what are mostly city infrastructure projects and utilities.

Support our coverage by becoming a digital subscriber.