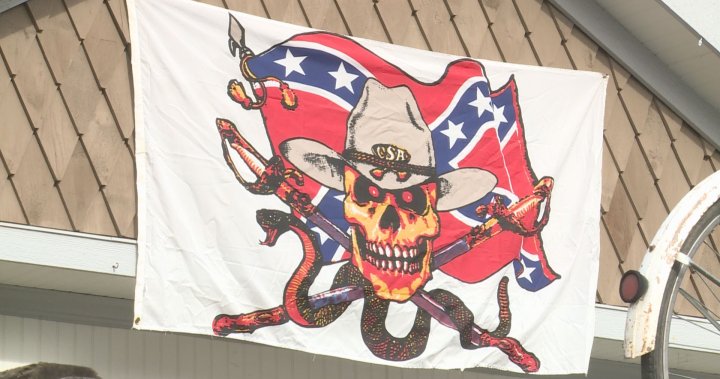 “There is no room for racism in this community. “

This is the message from Insp. Adam MacIntosh, who held a press conference on Tuesday to address three high-profile racist incidents in Kelowna.

The premiere took place just over a week ago when a Halloween exhibit featured an effigy of a body hanging from a tree near a Confederate flag.

The second came on Saturday when anti-Chinese graffiti was sprayed outside a Korean restaurant.

And the third was Halloween when a man was caught on camera shouting racist remarks at women who didn’t speak English. This latest incident sparked an altercation.

None of these incidents, nor a summer racist rant against a security guard Palladin, resulted in criminal charges, although MacIntosh said he consulted with both the RCMP Hate Crimes Unit in Surrey and the Crown attorney.

With the offensive display, the RCMP spoke to the owner, who removed the equipment. The graffiti incident was sparked by a disgruntled customer who was upset that he was denied entry despite not having a vaccine card and police are still seeking information about the bus incident.

MacIntosh said that not all of the incidents were related despite having occurred in such a short period of time and could not say whether the fact that they were in close succession indicated a larger problem, saying that even three such events in three months would be too many.

But, he said, these are “times without precedent.”

“I would suggest to you that we have gone through, no doubt, in the last 18 months, a mental health crisis surrounding the effects of the pandemic,” he said.

Hamilton to ban the display of flags, symbols known to promote hatred on city property

“There (are) other restrictions, warrants, vaccination requirements that occur for travel and so on, people trying to work and unable to work. A combination of all of this adds stress to individuals. Whether or not this is an aggravating factor as to why a person chose to make racist remarks, chose to hang an effigy, chose to spray paint racist symbols, I cannot answer.

The transgender journey of an OHIO man

The cost of surrender – Journal