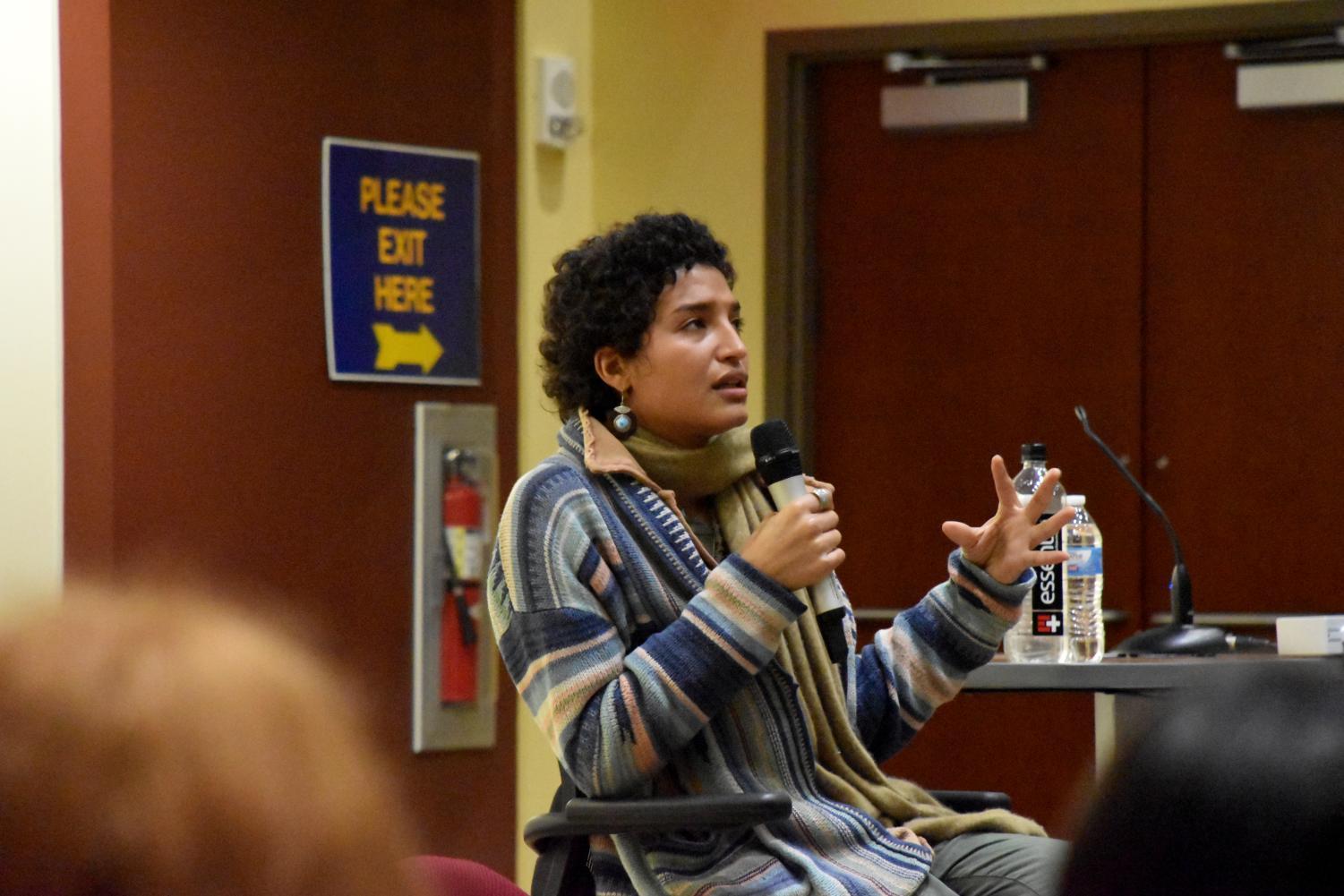 Moore, known for his role on FX’s hit show “Pose,” offered advice on a wide range of topics from microaggressions in the workplace to understanding one’s identity. The Rainbow Alliance Board of Directors moderated the event, which was attended by approximately 40 attendees.

Moore said they came to campus with the intention of helping students navigate the current political climate from the perspective of a queer black person in America.

“I think now more than ever, even though the weather and climate make me feel like I need to question myself and challenge myself, my spiritual path, and what’s going on in the world, I realizing with everything that’s going on, the fact that we know something is wrong, that’s what we should be listening to,” Moore said. “Now more than ever, we have to trust each other.”

Moore gave the group some insight into how he handles microaggressions in the workplace.

Moore said sometimes the best way to deal with others’ microaggressions is to let them learn for themselves that it’s wrong.

“A lot of times people don’t know what they’re doing, they’re not aware of it — and responding takes my peace,” Moore said. “Not engaging in war sometimes allows the problem to solve itself.”

Caitlin Gill, a forensic science major and member of the Rainbow Alliance, said she enjoyed learning how she can better herself in the queer community.

“I liked hearing about this [Moore] had to say about the community and how we can improve within it,” Gill said. “I just heard about their experiences as a queer trans person.”

Moore said that while seeing other trans people gave them comfort, they were inspired to pursue a career in Hollywood by a variety of people.

Jessica Ravenscroft, the president of Rainbow Alliance, said the group asked Moore to speak in hopes they would bring a fresh perspective to campus.

“We were really hoping to get a different perspective on the trans experience, especially the black trans experience,” Ravenscroft said. “They have a lot of different backgrounds that I think are under-discussed in the community.”

In preparation for the Moore Event and other Pride Week activities, Rainbow Alliance requested $35,000 in funds from the Student Government Board earlier this semester. Rainbow Wedding Ring received funding after adjusting the expected number of participants from 50-100 to 300-400 people.

Emily Miller, the group’s communications director, said she hopes bringing in intersectional speakers like Moore who can speak from multiple experiences will lead to increased speaker diversity on campus.

“I hope Pitt brings in more people who are intersectional because I often feel like I’m in movies, and even when college brings someone in, the emphasis is on ‘We Bring a black speaker” or, “We’re bringing in a queer speaker,” Miller said. “Which is very frustrating because people aren’t treating intersectionality as normalized as it is.”

Miller said having Moore talk about their experiences allowed Rainbow Alliance to expand on the experiences the group was able to talk about.

“I think bringing people in is always a good way to build excitement,” Miller said. “At the end of the day, Rainbow can only speak from our own experiences and there’s not much we can do.”

Miller added that she was deeply touched by Moore’s time after the event speaking to each attendee one-on-one.

“My favorite part is that they take the time to stand here and talk to each person individually. I think that says a lot,” Miller said. “I would also understand if they were really tired and wanted to go home. them. But the fact that they’re here, still talking, is amazing. It was originally supposed to be just the Rainbow board, but I’m really glad they opened it up.

When asked what Moore wanted people to know about themselves, they discussed their motivation for growth and harmony for the world.

“I’m determined to grow,” Moore said. “I really want people to know about me that I believe in a free, fair and harmonious world for all – and that my visions include privileged people as well.”

“I think that was a really good way to start to end the week. He’s a very famous person and very nice to watch,” Gill said. and it was just a happy way to end the week.”

Moore ended the event by urging the audience to prioritize how they treat others, saying he believes this is the change we need to better ourselves and the world.

“What’s radical for me is learning to treat people for real. Learning to heal ourselves for real,” Moore said. “And to be an olive branch when the time comes. It will change the world.