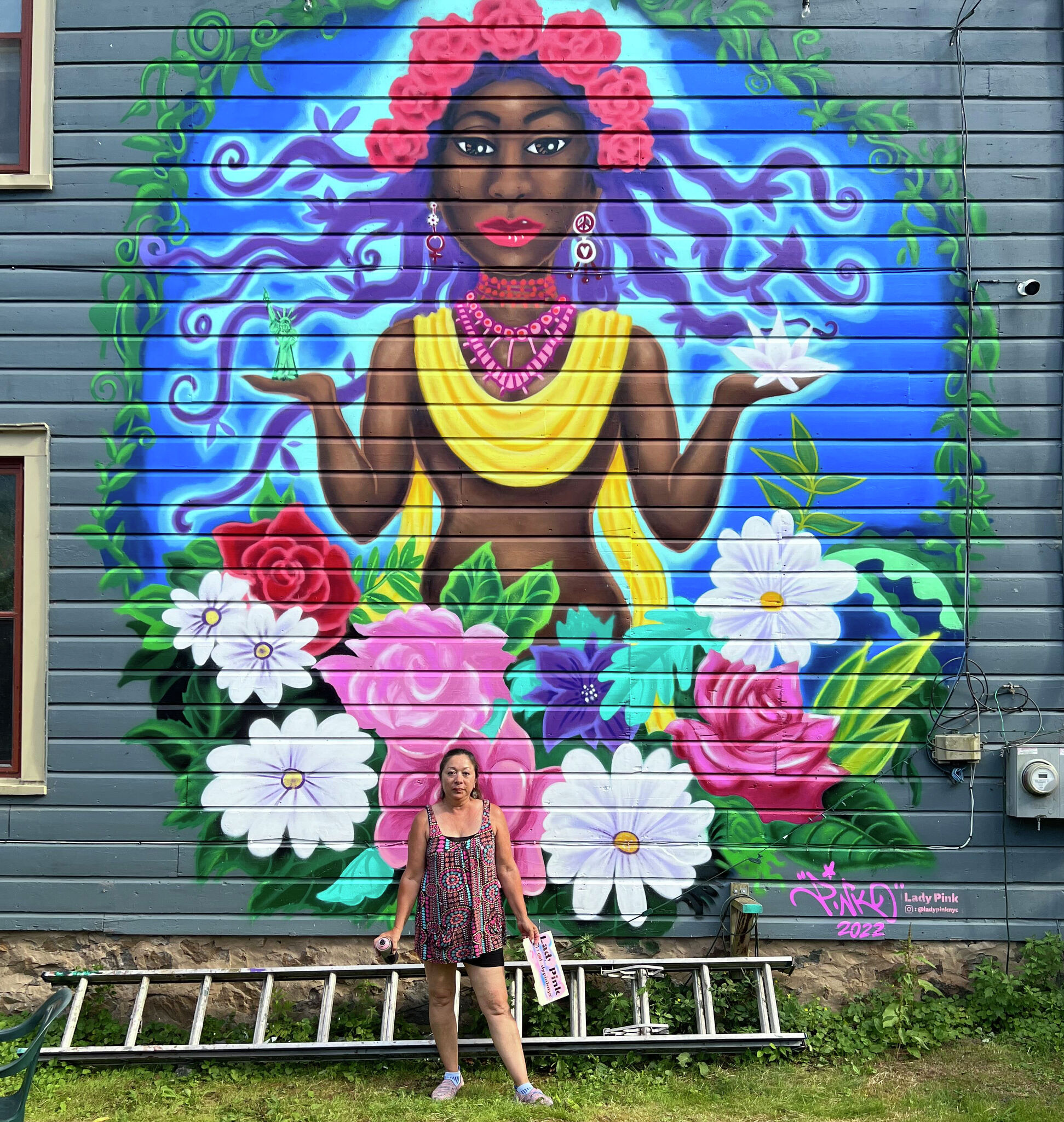 The Hudson Valley has long been home to famous artists. Lately, the most visible is Lady Pink, the first lady of graffiti. She quickly paints her brightly colored murals on main streets throughout the region, often for free.

This summer, Lady Pink transformed Rosendale, organizing volunteers and artist friends to paint giant rose-themed murals on more than a dozen walls in and just outside town, including on Santa Fe Grill, the Big Cheese and Rosendale Wine & Spirits. Heading north towards Kingston on Highway 32, it is as if once imperceptible buildings are springing up.

She also helped a group of students from the Women’s Studio Workshop in Rosendale create a “giant four-breasted mother nature”. Mother Nature’s middle finger is up and she’s holding a womb with a hanger and an LGBTQ pride flag. “We expressed our opinions. That’s what artists do. We paint images that scream about what we need when we can,” Lady Pink said.

There are also Lady Pink murals in Highland, Poughkeepsie, Kingston and Gardiner. “I have a graffiti spirit. We want to get up everywhere, as many places as possible,” she said.

Although Lady Pink has been particularly prolific this summer, her Hudson Valley designs have been on the rise over a span of nine years. This is how long the artist of Ecuadorian origin has lived in the region. She moved here after “too many graffiti police raids” on her New York home.

“They came into my house twice in 10 years. Last time with a SWAT team, helmets, shields. She says they took everything from computers to art to paint, which the police never returned, then later dropped the charges.

“The vandals brigade has jurisdiction in the five boroughs. I’m just a working artist. I don’t vandalize anything,” she said. “They hate to see us thrive on what they think is a crime.”

Locally, Lady Pink worked without worry. Free public murals are his passion project. She mainly works on commissions and collaborations with companies. Recently, these include a Scottish whiskey company, a car charging station in Brooklyn, and hand-painted sneakers for Louis Vuitton. Currently, she is also part of a large collaboration with artist Jenny Holzer at the Mass MoCA. The show will move to Düsseldorf, Germany in February.

To cope with this amount of work and a busy travel schedule, Lady Pink has a team. Her husband of 28 years, New York graffiti legend Roger Smith, is her executive assistant. “His skill set is different – ​​fonts and letters. I do more illustrative stuff. He can handle anything I can design,” she said.

For the Rosendale project, this team handed out flyers, knocked on doors, tracked down homeowners and asked businesses if they could paint their walls for free. The planning took months.

“I love getting permission to have walls for friends to come and paint,” she said. “Other famous ladies who charge thousands for murals have come to paint for free. Recreational painting, we do it so fast. And painting together sets the bar high.

Although Lady Pink and her team covered most of Rosendale in search of walls to paint, some community members were surprised when roses appeared seemingly everywhere in late June and early July.

Who is Lady Pink?

Born Sandra Fabara, Lady Pink started out as a graffiti artist when she was just 15, painting in New York’s subways. She found herself in gallery exhibitions in the late 70s with artists like Jean-Michel Basquiat and Keith Haring.

“They were legendary. It was extremely intimidating. I had to get good fast,” she said. She’s been working ever since.

“I don’t know if people who aren’t deeply engaged in street art really understand who she is on the New York scene, who she is in terms of her story,” said Lindsey Wolkowicz, artistic director of the O+ Festival. . Lady Pink produced two murals in Kingston and one in Poughkeepsie during the festival. Wolkowicz calls it a “huge goal and get” for the O+ mural program.

Despite these references, Lady Pink believes the people of Rosendale did not take her seriously – “just a woman” – until artists arrived in droves to paint her vision. “Art does a lot,” she said. “It can boost community morale, spirit and pride. You have to take it out on the street.

Still, there are “haters” put off by its work and scale. “It’s whimsical and not offensive to anyone, but people are such snowflakes lately. Everything offends. It’s misunderstood, it’s misunderstood,” she said. Her advice for someone who’s not connected to their work is, “Don’t stress. It’s just paint.”

Amy Dooley, owner of Studio 89, a gallery in Highland, was one of Rosendale’s painting volunteers. Lady Pink had painted over a faded mural of the Footbridge Over the Hudson on Dooley’s building in October 2021. “A lot of people thought the old mural was an eyesore,” Dooley said. She contacted Lady Pink to see what was possible. Turns out the artist had been staring at Dooley’s wall for three years. “I really wanted that wall,” Lady Pink said.

If a homeowner gives Lady Pink permission to paint and what to paint, she will consider doing it for free. Murals in highly visible places allow him to train his assistants on large-scale works using ladders and scaffolding. These murals also serve as advertisements for future commissions.

Dooley shared a general wish for an environment-related mural; all of Studio 89’s shows highlight the climate and explore the human relationship with the environment.

“She said she had a thing for bees, and then I had the idea to make a giant world,” Lady Pink said. The result – a mural of nature breaking through a concrete wall, a fantasy world where humans are small and insects feature prominently – took a few weeks.

Kingston has two Lady Pink murals, the collaborations with O+Festival. The first, “Native Americans Discover Columbus,” was made in 2016. The second, “Kingston Strong,” was painted in 2021 on the same building, an Ecuadorian-owned bodega off Broadway.

“You have his Latinx roots on one side and his Hudson Valley roots on the other. It was really special and a huge gift from him,” Wolkowicz said.

A shop owner from the Oaxacan community of Poughkeepsie contacted the festival after seeing the 2016 work. “She is really important to many local Latin communities in terms of a sense of representation in public space. He had seen himself reflected in our community and wanted to bring that representation home. Poughkeepsie’s mural is titled “Welcome to America…Land of the Free?”

Wolkowicz considers Lady Pink a mentor and educator as well as an artist. The spread of his work in the cities of the Hudson Valley had a very different impact than in New York.

“She challenged everyone who is going to produce street art: who are you giving space to? Who do you represent? We took that as a direct call.

Lady Pink is aware of its impact. It’s intentional. She also has fun.

“It’s cool to be an artist. I hadn’t expected this. It’s a constant jostling. I’m doing pretty well. There is always hope for other artists. I like to inspire others to become artists.

Payday loans versus installment loans: which is better?