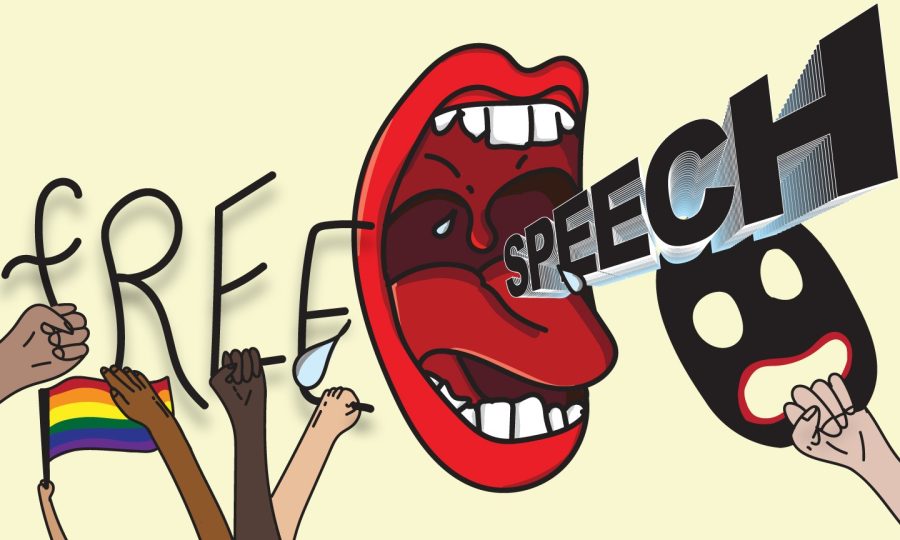 Free speech is safe at CSU – should hate speech be too? – The Rockies College Boy

What exactly is free speech, and is it safe at CSU? The answer is a little more confusing than it seems.

Last semester, two preachers arrived at The Plaza. According to first-hand accounts, they sprang the racism, sexism and homophobia that students actively engage in and that students walking past may hear. While their arrival has become something of a yearly routine for Colorado State University students, the fallout after they leave is anything but.

A debate surrounding the First Amendment and the notion of free speech has become increasingly prevalent in recent years. Some claim freedom of expression is under attack on college campuses, while others claim that some people are abusing their first amendment rights. the presence of preachers on campus brought this fiery headline debate to The Plaza.

While the presence of controversial preachers on The Plaza is relatively normal for CSU students, the campus response to the preachers last September sparked heated debate on campus. After the preachers left their places in the plaza, a few students formed a group called CallOutCSU facilitate a demonstration against the preachers and organize a listing of 11 demands of the administration of the University.

Among the demands were that CSU President Joyce McConnell condemn hateful behavior, such as that of preachers, that the CSU establish a task force to monitor and investigate similar displays of hate, and that the CSU move speakers provocateurs from The Plaza to the more secluded Stump.

This demand brought the national debate on free speech to Fort Collins. The debate centers on a fundamental question: what exactly is free speech, and is it safe at CSU?

The answer to this question is a little more confusing than it seems.

Historically, CSU has been a staunchly pro-free speech university. Even after incidents of bias regarding blackface, white nationalist propaganda and swastika graffiti on campus, the University administration has repeatedly refused to take action on incidents like these, citing its Commitment to the First Amendment.

Gabby Reichardt, president of the conservative student group Turning Point USA at Colorado State University, said she and her organization approve of CSU’s handling of bias-related incidents in recent years.

Reichardt said that while she disagreed with the messages from preachers on campus last semester, she supported preachers’ right to be on campus.

“We never defended or aligned anything (the preacher) was saying, but we were defending his right to be there on public property,” Reichardt said during a presentation on The Plaza. “People have every right to use both of their legs that they used to walk towards him to get away from him.”

Reichardt mentioned that while she approves of the CSU administration’s handling of free speech issues, she doesn’t like the mindset of students on campus on the issue.

“As far as college campuses…they kind of see hate speech as something that’s still illegal, but they think they should define what hate speech is, when hate speech is legally defined,” Reichardt said.

Reichardt’s argument is partially correct — hate speech has not specific legal definitionbut inflammatory, hateful or otherwise offensive speech has repeatedly been deemed to be protected speech.

Across the aisle, Douglas Ringer, a CSU graduate in December 2021 and president of the CSU Young Democrats at the time of his interview with The middle schooler in December 2021, argued the opposite. He said many perpetrators of recent bias-related incidents have crossed the line between free speech and harassment, stripping away their First Amendment protections.

“We spoke out a lot against (the preachers) and participated in the protest against them,” Ringer wrote in an email to The middle schooler. “From what I’ve heard them say, they’re hateful fanatics who don’t belong on campus. I am a strong supporter of the First Amendment and the protections it offers us; however, I think much of what they said went beyond what can be considered protected speech.

Ringer’s point is one that also has partial basis in First Amendment court rulings and legislation. Speech that acts for incite violence or otherwise disturb the peace was judged as not protected by the First Amendment.

Hate speech, however, has also been repeatedly judged to be protected speech.

Heather Hicks, assistant professor of political science at CSU, chastised the politicized nature of the free speech debate. She said the CSU did not refuse to punish hateful rhetoric out of political ideology but rather out of legal necessity.

“Whether a speaker’s First Amendment rights were restricted depends on whether he was trying to speak at a public or private university,” Hicks wrote.

Hicks clarified that hate speech is a term that carries very little legal weight. There are no laws prohibiting or limiting hate speech, as it has been repeatedly protected by the First Amendment.

“The Supreme Court has ruled that hate speech is protected by the First Amendment freedom of speech,” Hicks wrote. “More recently, in (the) 2017 case Matal versus Tamthe Supreme Court issued a unanimous decision, which stated (that) ‘Speech may not be prohibited on the ground that it expresses offensive ideas.’

“In other words, hate speech is included in freedom of expression,” she wrote.

What remains to be seen, however, is how the CSU community will handle the notion of free speech. Although there is little the CSU itself can do to stop provocative speakers from preaching hate, spreading violence or otherwise agitating campus, students at the school are showing a growing willingness to oppose publicly to speakers they consider hateful.