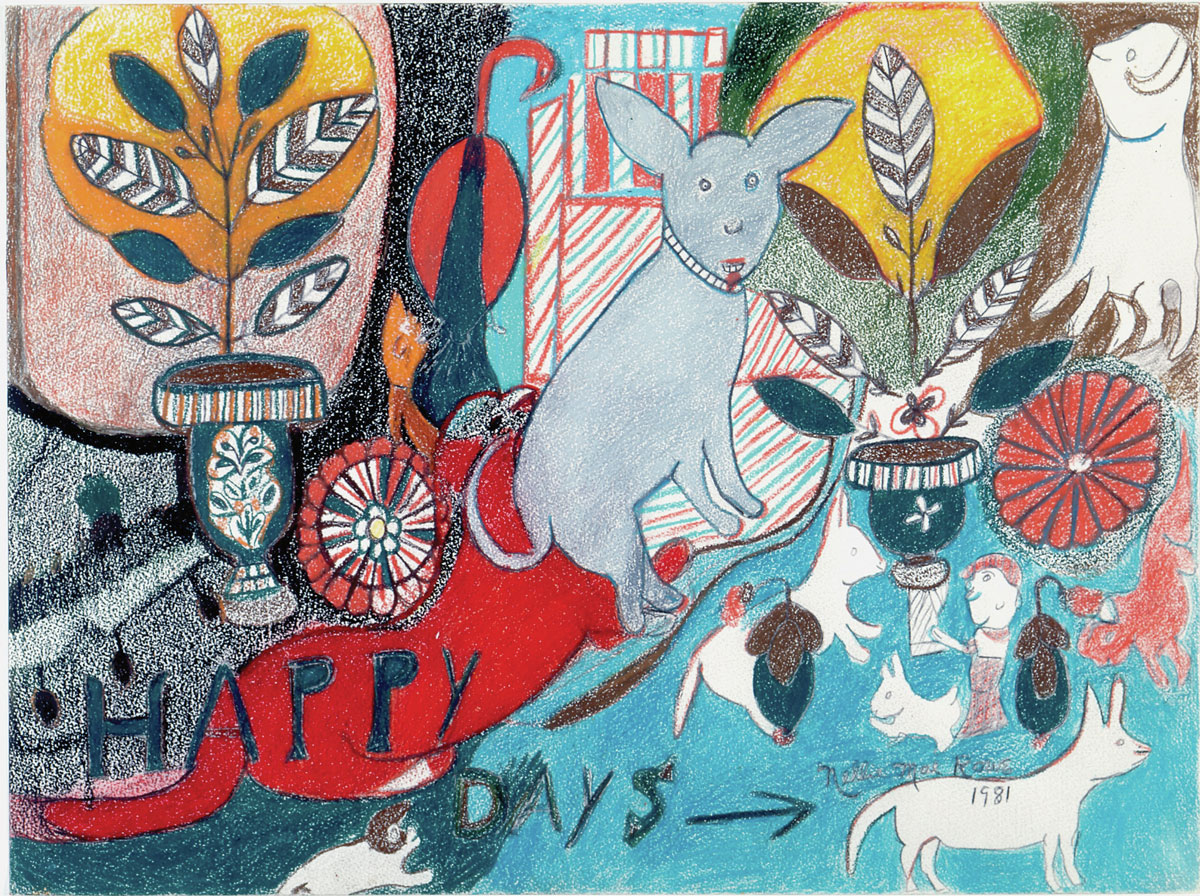 Every Sunday, Cathi Perry and her sisters visited their Aunt Nellie Mae Rowe in her “Playhouse” in Vinings. “Nothing was off limits at Aunt Nellie’s,” Perry recalls, describing afternoons spent eating pound cakes, drawing pictures with pencils on notebook paper, and making jewelry from materials. recovery. Rowe has transformed her home into a world of her own imagination, adorning floor-to-ceiling and floor-to-tree branch with masks, found objects, dolls, chewing gum sculptures and hundreds of drawings.

Passers-by often took photos of Rowe’s eclectic home, and she invited them to come in and explore. Perry says his aunt knew she would be famous someday; by the end of his life in 1982, his work had been shown in exhibitions in Atlanta, Chicago and New York. The High Museum was the first major museum to start collecting his work and is now reintroducing Rowe to the world in a new exhibit, Truly Free: The Radical Art of Nellie Mae Rowe, in the Wieland pavilion until January 2022.

The exhibit features 60 of the more than 200 pieces from the High Collection, including Rowe’s vibrant self-portraits, drawings of flora and fauna, and handmade dolls. In addition, the exhibition will feature photographs of Rowe’s home and artistic environment taken by Melinda Blauvelt and Lucinda Bunnen in the 1970s.

High’s self-taught folk art curator Katherine Jentleson has been working on this exhibit for three years but says the 2020 Black Lives Matter demos have given her a better appreciation of Rowe’s work.

“It made me think more about what she’s been through in her own life and what she’s been through to continue to claim her own artistic voice, to demand visibility and respect, and to demand dignity for her- same and his job, “Jentleson said. “What she was doing was such an act of political and personal will, not to enter quietly into her final adulthood but to make them the most artistically productive of her entire life.”

Rowe claimed she was born on July 4, around the turn of the 20th century in Fayetteville. She came to art in her late sixties after the death of her second husband. She had always had an affinity for artistic expression, but chores on the family farm and then as wife and servant forced her to put this vocation aside. In the late 1960s, as the black arts and women’s liberation movements bubbled across the country, Rowe took the opportunity to write her own story. She drew her name around the words “really free” – the title of a Bible Society flyer she received in the mail – that inspired the name of this exhibit.

In 1978, she caught the attention of Atlanta gallerist and art collector Judith Alexander, who befriended and represented Rowe. Alexander donated over 150 pieces of Rowe’s work to High between 1998 and 2003. The High has exhibited Rowe’s art as part of the permanent collection since 2005, but Jentleson hopes this exhibition will make her a household name.

“I want people to see each work as its own moment of splendor,” Jentleson says. “I hope she will be a part of this moment we live in when the black female artists who worked in the latter part of the 20th century are finally getting the recognition they deserve.”

This article appeared in our September 2021 issue.