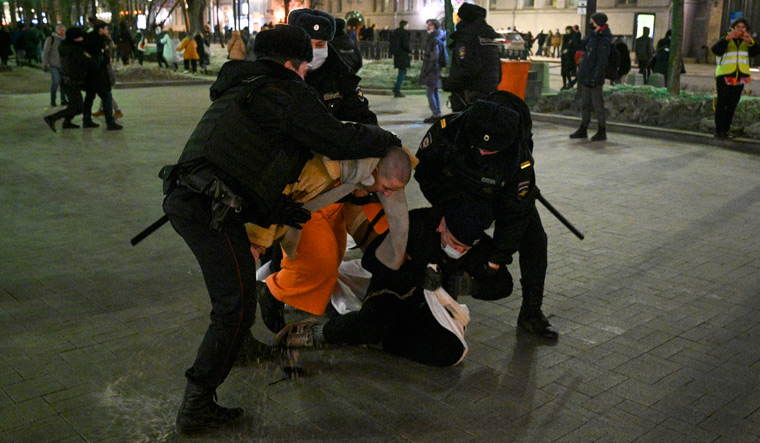 Spring has come to Moscow. The weather is nice outside and the sky is deep blue. It seems like the perfect time to take advantage of the weather, but no one is doing it. All passers-by are on their smartphones, following the events in Ukraine and the new sanctions that Western countries are imposing on Russia. Ask passers-by what day it is and they will probably take a while to respond. But, they can tell you that the dollar exchange rate at the Russian Central Bank is over 100 rubles, compared to just 75 rubles a week ago. But even at the new rate, it is impossible to buy dollars. Banks sell it at 150 rubles per dollar

It all started a fortnight ago with several speeches by Russian President Vladimir Putin to his fellow citizens. The speeches came as an explosion, completely unexpected by the majority of the population, since almost everyone believed that the warnings of NATO countries about the imminent Russian attack on Ukraine were nothing more than western propaganda. However, on February 24, Putin told his fellow citizens: “In December 2021, we again tried to agree with the United States and its allies on the principles of ensuring security in Europe and on the non-enlargement of NATO. All is in vain. The American position does not change.

On this basis, Putin also explained the decision to launch a special operation in Ukraine. “Those forces that carried out a coup in Ukraine in 2014, seized power and maintained it with the help, in effect, of decorative electoral procedures, finally abandoned the peaceful settlement of the conflict,” Putin said. “For eight years, eight endless years, we have done everything to resolve the situation through peaceful and political means. All this is in vain… Russia cannot feel safe, develop, exist with a constant threat emanating from the territory of modern Ukraine… They simply did not leave us any other possibility of to protect Russia, to protect our people, except for the one we will have to use today.

Today, after the fall of the rouble, amid rising prices and vague fears of an escalation towards nuclear conflict, Muscovites leaf through or scroll through the news, faces gray and gloomy. There is a continuous flow of information. But, it is becoming increasingly difficult to distinguish between truth and fake news. Pro-government media talk about the successful offensive of Russian troops in Ukraine, while opposition media lament the heavy casualties.

State pressure intensifies. The authorities are increasing censorship every day, and the Russian prosecutor’s office reminds citizens that there is an article in the criminal code on high treason. “Fake news is everywhere,” warn the authorities. “The dissemination of such information is prohibited. Only official reports of state departments of the Russian Federation, such as the Ministry of Defense, are trustworthy.

The statements of pro-government bloggers and nationalists who support the operation on social networks are getting louder. Bloggers promoting “the strong hand of the state” warn that “in an acute situation, an unambiguous choice must be made. And always be ready to take responsibility for your choice. The current situation is a wartime choice, and the laws of war apply. Speaking now against your country, you make your choice.

At the same time, every day there are more and more letters against the operation, signed by well-known personalities from science, culture and academia, as well as journalists and doctors. There have been at least 10 open letters, including from students/graduates of the Moscow State Institute of International Relations of the Russian Foreign Ministry, the country’s main educational institution for diplomats. An open letter from medical workers says: “As always, we do not divide belligerents into friends and foes. We have taken an oath to help everyone, regardless of nationality, religion or political opinion. But now our help is not enough. The fights will take many lives, paralyze so many fates that we will not have time to help with all possible efforts. People will scream in pain and call for mothers in the same language.

Almost every day, “anti-war” rallies take place in the streets of Moscow, St. Petersburg and other cities. These demonstrations end in the same way: the police arrive and take the participants away. Some are only fined, while others face up to 20 days in jail. The streets of Saint Petersburg are covered in graffiti protesting against the operation in Ukraine. There are fewer such inscriptions in Moscow, but they also exist. It’s just that here they are more actively washed and painted.

Russian opposition leaders are also speaking out. For example, Yabloko party leader Grigory Yavlinsky said he expressed “categorical protest against the outbreak of hostilities against Ukraine. This war is Russia’s war with the objective course of history, a war against time, a tragic downfall of the reality of the modern world. Opposition leader Alexei Navalny, who is currently in prison, said that “Putin is trying to make everyone believe that Russia attacked Ukraine, that is all of us. But it’s not [the case]. We must show that we do not support this bloody war.

The tension and anxiety have led to a sharp division in Russian society between supporters of the operation and those who oppose it. According to estimates by the Russian Center for Public Opinion Research (VTsIOM), published on February 28, 68% of Russians support the decision to launch a special operation in Ukraine, while 22% oppose it. But, it should be noted that VTsIOM does not enjoy much trust among Russians, as it has been repeatedly suspected of data juggling. Independent sociologists estimate the number of hawks at around 30%, the same number they say oppose hostilities. The rest wavers.

In the first days after the start of the “special operation in Ukraine”, the hesitant majority opposed such a decision by Moscow. However, they are gradually getting used to it, thanks in part to the massive propaganda of the state and pro-state media. Therefore, every day more and more people approve of military operations. This is why one has the feeling that the opponents of the “special operation”, accused of betraying the fatherland by the pro-government patriots and nationalists, will become less active in the coming days. At the same time, ordinary citizens, as the socio-economic problems caused by the sanctions worsen, will no longer be concerned with seeking the truth, but with survival.

In addition, the tightening of the state’s information policy will also contribute to the reduction of protests. Already there is a partial blocking of social networks, such as Facebook and Instagram, as well as VPN services. The head of the Human Rights Council of the Russian Federation offered to completely block Facebook in Russia until the end of the special operation. And, as the head of the security committee of the State Duma (lower house of parliament) of the Russian Federation, Vasily Piskarev, said on February 28, in the near future, parliamentarians could consider a draft law providing for up to 15 years in prison for “false news about the actions of Russian troops”. The use of the word “war” in relation to what is currently happening in Ukraine is considered by the Russian authorities as “spreading false information”, punishable by a fine of more than 48,000 dollars.

Meanwhile, the issue of deteriorating economic conditions and associated price hikes looks more worrisome every day. Store prices are skyrocketing. For example, the price of a bottle of beer has increased by 30% in a few days. Consumer electronics prices have increased by 50% on average. Cars, including used ones, have become very expensive. And this is only the beginning of the sanctions.

The Russian government is trying to take measures to alleviate the problems. Thus, in response to the sanctions, the Russian Central Bank suspended transactions to “cool the market”, more than doubled the discount rate to 20% and prohibited the execution of orders from foreigners to sell their Russian securities. In addition, on February 28, a decree was issued on the mandatory sale of 80% of foreign exchange earnings of Russian exporters. In theory, this should support the Russian financial system. However, the overwhelming majority of Russians are not concerned about the liquidity of the banking sector, but about the expected rise in the prices of food, medicine and basic necessities.

My aunt, who is 71, calls me five times a day to find out what will happen to her money. She has some savings – about 5,00,000 rubles (at the time of writing this was equivalent to just over $5,000; no one knows how much it will cost at the time of publication). She saved this money for emergencies, such as medical bills or surgery. Now she asks me every day if she has ever become destitute. I answer: Not yet.

4 online loans that can help cover