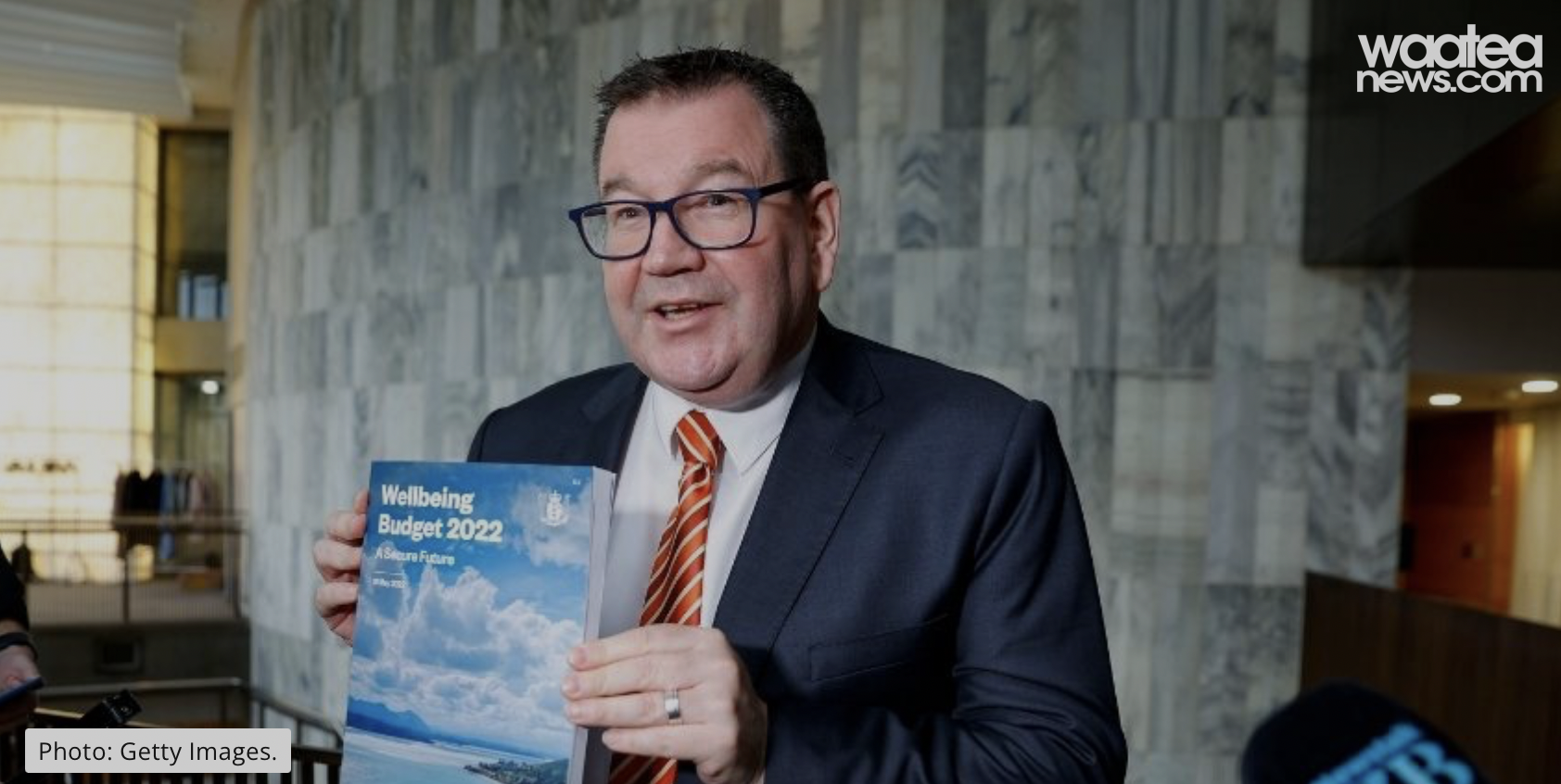 By Calvin M. Roa Last updated May 26, 2022
Share
Grant Robertson is a huge fan of British socialist folk-punk singer Billy Bragg. The finance minister even wrote an opinion column last year that began and ended with the lyrics to Bragg’s iconic song “Between the Wars,” with its key phrase “Sweet moderation; heart of this nation. Robertson titled his column, “We can be a nation of gentle moderation — but only if we keep working at it.”

The finance minister and deputy prime minister appropriated Bragg’s “soft moderation” line as vindication in the face of criticism that his government had become moderate rather than “transformational”. In fact, his column sought to portray growing political discontent and anger as dangerous and something for all to condemn. Unlike Radicalism, he claimed his type of “gentle moderation” was to “give everyone a healthy dose of knowledge” – that is, a very down-to-earth way of signaling a vague sense of egalitarianism. .

What Robertson misses in Bragg’s song is that it’s actually a critique of politicians like Robertson, who don’t side with the poor. Bragg’s song calls for a true “cradle to grave” welfare state, and she criticizes governments that deny workers “a living wage.” The character in the song recalls: “As times got tougher; I looked to the government to help the worker,” but the government did not help the poor and instead helped the rich.

That, of course, is what Labor has generally done since 2017. And again, that’s what Robertson did last week with his budget that did very little for the poor and working class, but which has been well received by companies.

His main initiative was a $350 payment to those in the so-called “squeezed middle”. It was the most daring element of a very modest budget. More controversially, the cost of living payment (COLP) of $350 was deliberately designed so that the poorest New Zealanders would not be eligible.

Many Labor supporters, particularly among political commentators, have praised the COLP, seeing it as proof that the government is always progressive, or can resist National’s attempts to win the center of New Zeeland.

The Treasury has recommended that the billion-dollar package be much better spent on low-income people, and that this could have a positive impact on the government’s stated goals of reducing child poverty. The Treasury pointed out that it is low-income families who have been much more affected by the cost of living crisis.

That the Treasury is to Robertson’s left says a lot about his “sweet moderation”. As Herald political editor Claire Trevett pointed out, “It’s not often that the Treasury is the one preaching the Labor gospel as the preferred option and it falls on deaf ears in the Labour Party.” She pointed out that COLP was therefore more about giving the impression that work was coping with the cost of living crisis than doing anything meaningful.

Responding to criticism that he ignored such strong advice from the Treasury, Robertson said he wanted the payments to go to a “wider group”, although he probably meant a “wealthier group”. . And he tried to make a virtue of the fact that he was often at odds with the Treasury.

For those who truly care about inequality and the need to protect workers and the poor from the cost of living crisis, it is time to demand that COLP be extended. Such extensions are entirely feasible, if the government is put under pressure – Robertson has previously admitted that COLP extensions are possible if deemed necessary.

First, the whole “cost of living package” could be extended beyond three months, and perhaps should continue as long as inflation is high. Duncan Garner argued for this Monday in the NBR: “For this to make sense and make a real difference, it surely had to last as long as inflation itself. But, when it does, inflation is likely to be higher than it has ever been and is expected to rise again before it comes back and falls. Yet just as it kicks in, the gas tax is reinstated and half-price public transit ends. How difficult would it have been for the Labor Party to extend all this until Christmas? Easy, really; It’s all about priorities.”

Second, the COLP must be higher. At the moment, the payment is quite miserly. As many have pointed out, the $27/week is barely meaningful — in the metrics Robertson favored for his budget launch, the payment will only allow recipients to make 18 cheese rolls each week. And economist Brad Olsen has calculated that the average household will soon pay $89/week more due to inflation, about three times more than the weekly payment.

In other words, financial journalist Brian Fallow claims that payments “will represent just over half of 1% of household consumption, the cost of which is increasing at almost 7% per year”. And economist Stephen Hickson of the University of Canterbury says, “At the median wage of around $57,000 a year, an extra $350 equates to a 0.6% wage increase. Inflation in the first quarter of 2022 alone was 1.7% and 6.9% for the year, and this is a one-time payment – you don’t get this money on an ongoing basis.

Third, payment must be extended to the poor. As Stuff’s Henry Cooke points out, the payment is designed so that even Cabinet minister partners are eligible if they are in middle-income jobs. How about the payment is extended to beneficiaries and retirees? Right now these people are facing rapidly rising food prices, and the government says they can use their winter energy payments for these costs – by actually choosing to turn off their heaters. in order to be able to eat.
The government really needs to listen to the treasury to take care of the poor.

The 2022 budget came to epitomize Jacinda Ardern’s all-time moderation in government since 2017 – timid and conservative, and certainly not very transformative. While many were clamoring for public transport to be made free in the budget, or at least for the half price initiative to become permanent, a watered down version was announced for community cardholders, and it was announced that the fares would be good. market would end after the two months. extension. In total, Robertson has allocated a whopping $132 million to this public transportation initiative.

For this reason, writing for the Spinoff Danyl Mclauchlan commented on the budget saying it is hard to see what Labor is actually doing “with the most powerful electoral majority in our modern political history”.

Other progressive commentators were also appalled by Labour’s vacuum. Josie Pagani suggested he was typically bland and lacking in guts: “Voters won’t reward the party for this budget. Trying to be everything to everyone is like avoiding tough decisions. Was it a climate change budget, a health budget or a cost of living budget? A bit of all of the above seems inconsistent.

Pagani says it was an “on the spot” budget that neither moves the country forward nor backward, and does nothing to address child poverty or “intergenerational hardship,” which is pushed aside as an issue to be dealt with in the future.

Similarly, social policy researcher Kate Prickett of Victoria University of Wellington says that once again the most vulnerable families have been forgotten by Labor and Ardern will now be well below its poverty targets. infant. Prickett said, “This budget will be remembered as the first to conspicuously leave poor children behind.”

Similarly, inequality researcher Max Rashbrooke argues that by targeting income relief in central New Zealand, the government is heading for disaster: “Labour has three main child poverty targets for 2024; as things stand, at least two, if not all, of these goals will be missing. This is potentially disastrous for a Prime Minister who values ​​this issue so much and for whom kindness is supposed to be paramount.

Rashbrooke laments that the myth of Labour’s so-called ‘radical incrementalism’, in which the government was supposed to ‘try to achieve its most ambitious goals step by step’, is now exposed as a failed strategy.

The government’s strategy, according to former Green MP Gareth Hughes, is one of “demanding failure”, which he defines as avoiding addressing the root causes of crises and instead spending to fix the symptoms. Budgets like last week are corrective band-aids, and the result is that crises continue: “A rental crisis, a housing crisis, an inequality crisis, a poverty crisis, a biodiversity crisis and a weather still stalk Aotearoa.

Of course, some Labor and Robertson defenders claim they are still radical, pointing to the large sums spent in the budget. But this is somewhat illusory. Even Robertson points out that his own spending forecast will push public spending below 30% of GDP, and thus the national government. He says his latest budget represents fiscal tightening.

Therefore, although much is promised in terms of health, housing and education, as broadcaster Rachel Smalley points out, “by 2026, annual operating expenditure is expected to be lower than it was in 2022. in the fields of health, education and housing”.

Robertson therefore continues to be something of a moderate, and might even sell his approach, and that of the government, as “soft conservatism” rather than Billy Bragg’s “soft moderation”.

In fact, on Budget Day, Bragg announced he would be coming to New Zealand to play an exclusive three-night set in the capital, at Victoria University of Wellington, in February. Will Robertson show up to sing “Sweet Moderation; Heart of this nation”? Most likely. But the finance minister will have to be prepared to be lectured from the stage about Labor politicians betraying the poor.