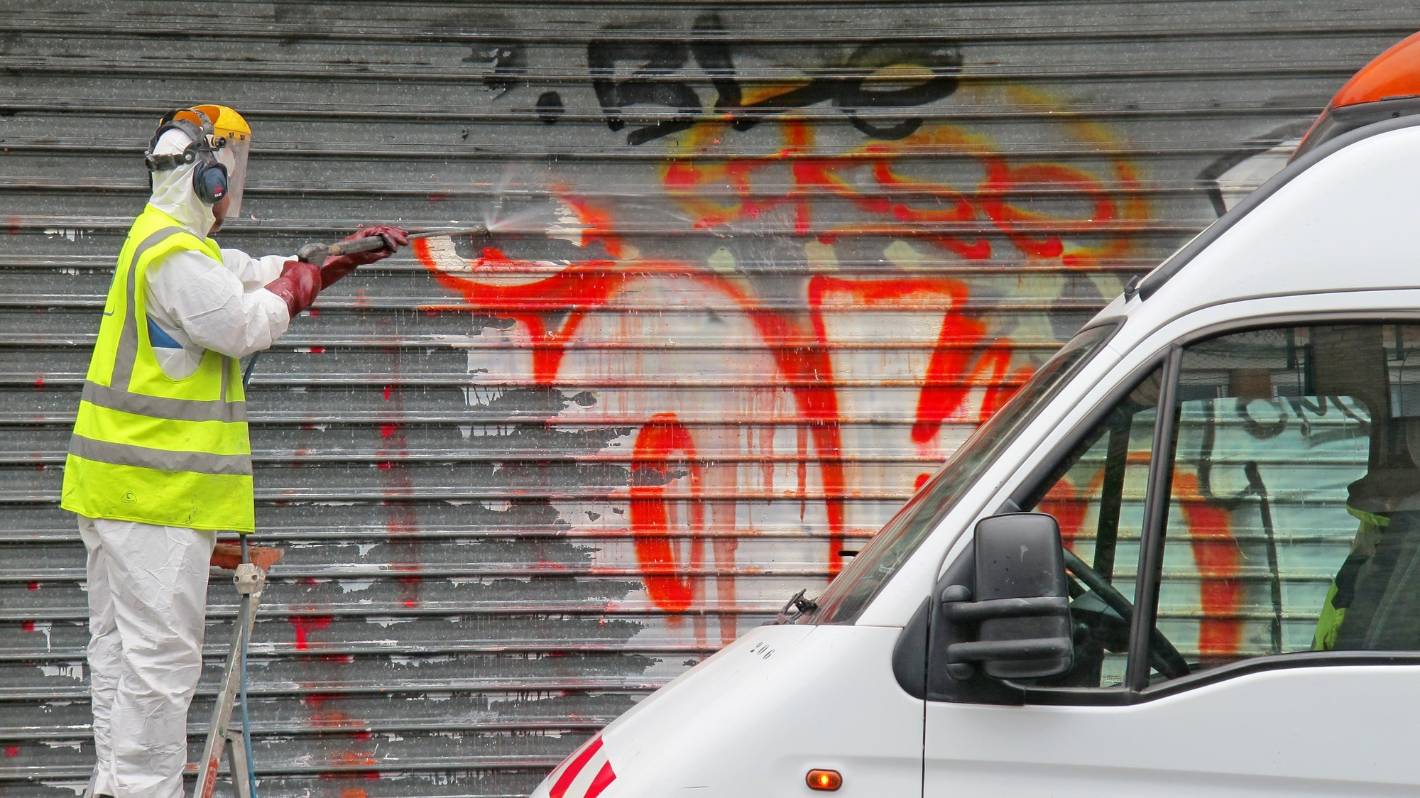 Covid-19: The power of words during the public health campaign of our lives

OPINION: The lettering was hard to miss – angry black capital letters running along a plywood fence next to Waiheke Island’s only supermarket; five yards of spray-painted indignation.

“Jacinda + the media is lying to youâ€¦ Tyranny is upon us,” as well as shocking anti-vaccine tips for teens and their parents.

After a few hours the supermarket painted on it, but not very well. Usually, I’m told, taxpayers bring in a private contractor from Auckland to clean up particularly disgusting graffiti in a public place, if the owner doesn’t take action.

Unfortunately, this was necessary just a few weeks ago after anti-vax graffiti appeared on a wall at Little Oneroa beach. The locals were furious and someone smeared heartfelt messages on the offensive words.

READ MORE:
* Questions about the future loom as Westport recovers
* We’ll all probably end up having Covid-19 – but after two jabs I’m not going to die of it
* Garage Project creates new beer to help struggling theaters

For boards, removing offensive graffiti is as important as removing racist graffiti, local board chairperson Cath Handley tells me. â€œWe have great support from the police on this. People are entitled to their opinions, but targeting the vulnerable is incredibly sad. “

To great evils the great means. On the KÄpiti coast, shoppers have been treated with misinformation about vaccines stuffed into the packaging of their new toasters and boxes of orange and turmeric herbal tea bags.

These pathetic heart attacks reek of “temporarily restricted” social media accounts with single-digit followers; of lonely friendless Facebook posters by old friends, suppressed by common consent. When even Twitter doesn’t want you, the toaster packaging has to have some appeal.

Part of me, it’s true, is gagging in response. A learned friend suggested spray painting “peer reviewed research trumps graffiti” over other stuff. This is fine, although it has the word â€œtrumpâ€ in it, which might confuse some people.

Normally, I don’t like platitudes, tropes, maxims, slogans and truisms stuck on agendas, mugs, pillows, calendars and pencil holders. But there is a pandemic. Needs must. Pope Francis’ homily that ‘being vaccinated is an act of love’ is the sweet, sweet message of Covid-19 that I can live with, even in my toaster wrapper.

In those brave days, even old war poster slogans like “Together we can do it” and “Victory Begins at Home” sound like catchy, up-to-the-minute health messages.

New Zealand’s Covid-19 messages are more sport than war, of course. “ Go hard and go early, ” ” Five Million Team ” and ‘United Against Covid-19’ are winning mantras in tune with the findings of science communication research – if you want them to people change their behavior, explain why, explain how, stay positive and say everyone is doing it.

Most of us feel safe, and masked vaccinators on the bus are now the social norm.

The government has indeed “followed the science” including the science of public health messages.

This seemingly obvious strategy is “markedly different from elsewhere,” as former Wellington reporter Elle Hunt explained in The Guardian. â€œThe state of Oregon ran a campaign with the slogans ‘Don’t accidentally kill someone’ and ‘How many people live or die’ is up to you. In the UK, government campaigns have warned ‘Don’t let coffee cost a life’ and have shown the reproaching faces of people on ventilators: ‘Look him in the eye and tell him the risk doesn’t is not real â€. “

Our search for solace and meaning in the age of Covid has not been lost on craft breweries, selling to a young crowd whose lives have been turned upside down. In the United States, breweries have responded faster than politicians. In March 2020, Ale Asylum launched a successful beer called F … Covid, and donated the proceeds to charity. â€œVery, very rarely in life you get 100% of the people behind something,â€ marveled the co-owner of the commerce website. Seven fifty.

The same article noted that Texan brewer Weathered Souls released a hazy IPA called 6 Feet of Separation; the most revealing came from the New York brewer Bridge and Tunnel, with his humor No Mask? Fugetabout. The same brewer also launched the poignant brew, â€œI volunteer to go to Marsâ€. It tasted like ‘noble hops, banana, cloves and chewing gum’.

New Zealand labels like Behemoth, which brought us Im-peach-ment 2: This Time it’s Insurrection, and the IPA Riden With Biden are, for now, resting on their laurels.

Well, I would like to submit a beer name that I copied from a March for Science protest board that I saw once: â€œNo Science No Beerâ€. (Geddit?)

Graffiti is a crime, so I’m not going to sneak up at night and paint slogans like, ‘Don’t be afraid, shoot yourself! you are probably doing the right thing, ” or â€œEhara! Ko koe te ringa e huti punga! (Yes, yours is the best suited arm for lifting anchor! Aroha by Dr Hinemoa Elder). Except on a legal graffiti wall, obv.

Getting caught when he’s only halfway through the mish can spell disaster. A buddy’s friend was arrested during the Save Aramoana campaign in Dunedin (circa 1981) as he wrote ‘Dunedin needs a smelter like a fish needs a bike’ in a parking lot near the Octagon. She had just finished painting “foundry”. Other protest graffiti was cleaned up, but hers persisted for years.

Jenny Nicholls is a Waiheke-based journalist specializing in scientific commentary.