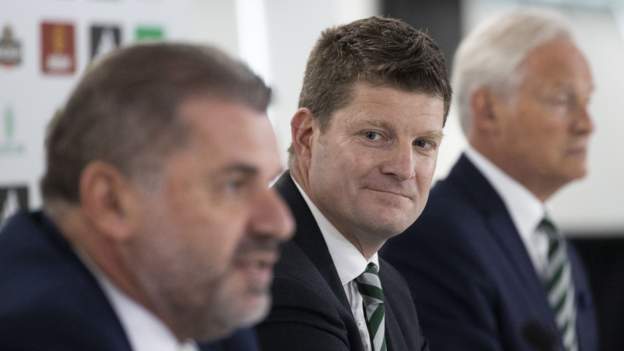 McKay spoke for Scotland that day, a non-stop mantra of how, in the months and years to come, he would “modernize”, “evolve” and “grow” the club for fans of the present and future.

His departure, a little over two months later, was a little more moderate. A statement on Friday surprised everyone. Twenty-three words from Ian Bankier, the club president. Twenty-three words from the now former CEO. Forty-six words in total. In what was a reign of blinking and you’ll miss it, the abrupt goodbye was fitting in a way. Already, it almost feels like McKay was never really there.

The farewell statement mentioned that McKay was leaving for personal reasons. He then expressed his best wishes to him “and his family”. The way it was worded was unfortunate because it gave the impression that something overwhelming had happened to her in her life.

Certainly in the offices of his former employer, Scottish Rugby, there was concern. McKay is well known in Murrayfield and in the information vacuum there were discussions of what was going on in his world. Nobody knew. Inevitably, the explanation of personal reasons and the mention of his family sparked speculation in the cyberland. No one had a clue what was going on, so theories emerged.

The next day brought stories to a few newspapers. The message relayed was that McKay was not functioning, that he was a little overwhelmed and that he had jumped out of his position before being pushed. This phrase “jumped before it was pushed” has appeared in several places. It was not the figment of a journalist’s imagination and it did not fall from the sky.

Many calls were made to McKay asking for his side of the story, but he was unwilling to give it.

One of the many curious things about all of this is that Celtic had known all about McKay for many years. He and Peter Lawwell got to know each other well. They worked on a few things together. McKay has spoken regularly of his love for the club.

As Celtic Park’s management team, they had ample opportunity to gauge and assess him as a potential successor to Lawwell. If you believe the work was too big for him, then you must surely be wondering about the judgment of those who put him there.

That is if you buy this version of events. Until McKay speaks, the story is incomplete. There are two sides to every tale.

Fans appreciated McKay’s openness and accessibility. He promised more fan engagement and in his brief span of time, he kept that promise. Some – many – Celtic fans complained last season that their voices were not being heard, that their board took them for granted, and that serious concern existed. A clear disconnect had opened. You can read about it, listen to it, and sometimes see it up close outside Celtic Park. Sometimes it was quite unpleasant.

In media and fan events he has spoken to, McKay has regularly spoken about the need to modernize the club. In one aspect, he was definitely getting there. The appointment of an impressive new manager, Ange Postecoglou, and a dozen new recruits (slow but they are there now) showed that the field part of the reconstruction was progressing. His thoughts on developing the business side have never been properly disseminated. He was gone before he could tell the difference on that front.

Dermot Desmond remains majority shareholder, Lawwell remains a director, Michael Nicholson, at the club since 2013, is still a key man with a new term as interim CEO. Gordon Strachan, the former manager, is also at the scene. Her three-month consultation is ongoing.

There is another manager, but the technical staff are the same as before. Maybe they don’t need it, but it’s not exactly a massive changing of the guard. It’s more like a return to the future than a brave new world.

In all of this, you think of Postecoglou. He comes across as a strong man who just cracks up with stuff, but this latest hubbub can’t be of use to him. After a little over 70 days, the CEO who praised him at every turn is gone. Who does he really report to now? Nicholson, Lawwell, Desmond, Bankier? Who makes the important decisions on a daily basis?

Celtic’s board are hoping for a winning streak, not only to put the club in a good position in the Premiership and Europa League, but also to allay any growing anger among the support. It’s not that they thought McKay was a revolutionary genius, but at least he listened to them. They might ask, “Who’s listening now?” “

Wins will delay a harsh critical analysis of the McKay business. Defeats will only highlight it. This brings us back to Postecoglou – the kind of cool operator the club needs in these special times.

GOP is a party zombie that flourished during the 2003 recall