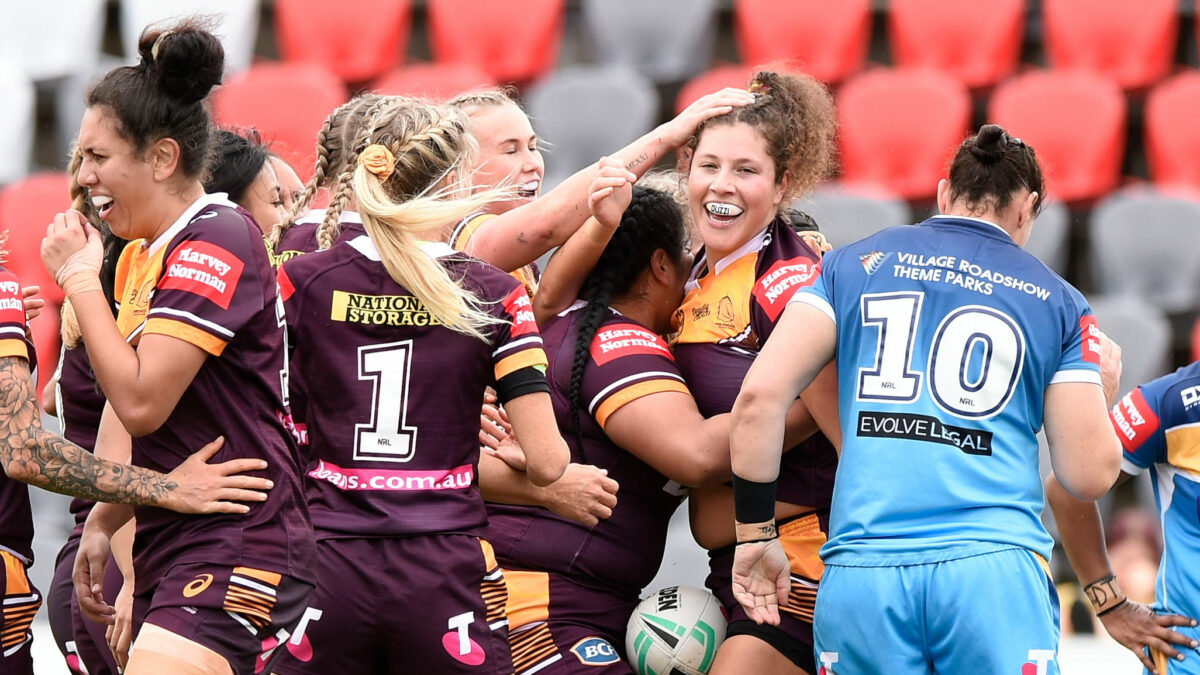 Round three of the Women’s National Rugby League Premiership saw the Brisbane Broncos claim their first victory of the season against the Gold Coast Titans.

But the weekend’s blockbuster game saw Sydney Roosters retain their position at the top of the ladder, beating St George Illawarra Dragons to help christen the new Allianz Stadium. Here are your talking points.

NRLW worthy of the best stadiums

What an opportunity for the NRLW with the Roosters playing the season opener at the new Allianz Stadium against the Dragons. With everything tied at 6-6 at halftime, the Chooks ran away with it in the second half. The final score of 34-6 reflected the dominance of the Roosters and in particular the class of Sam Bremner and Raecene McGregor, who continue to impress for the Habs.

After the match, a photo of some graffiti on the new stadium circulated. The graffiti was courtesy of James Tedesco and Isabelle Kelly, the Roosters’ respective captains, who made their mark with the early game score.

When it comes to the growth of the NRLW, the focus is on introducing more teams and properly compensating players. These are two hugely important issues, but it’s also important that players have the opportunity to play in quality stadiums with proper facilities – stadiums like Allianz and CommBank.

Playing in quality halls is not always the case in women’s sports. Earlier this week, GWG Giants AFLW player Chloe Dalton spoke about the conditions at Ikon Park, which she called “the most offensive” she has ever experienced as an athlete. Just to shower in private, players were forced to walk across the floor in “towels and sports bras.”

This is an issue facing women’s sports that is not unique to the AFLW.

It’s not just about the experience on the pitch, but also access to the locker room. Even the smallest things make a difference. At the new Allianz Stadium, with women-only changing rooms, at least women don’t need to walk into the changing rooms and see the urinals in the foreground, with the cubicles seen as an afterthought.

We talk about the magic of grounds like Leichhardt Oval, but it’s extremely important that our athletes have the chance to play on the right grounds with the right facilities. Because right now venues like Leichhardt are not able to host a women’s rugby league at this high level.

The race for the final is on

With their victory over the Dragons, the Roosters have all but secured their place in the final.

As Parramatta remain winless, they faced all three tough teams in the competition; being the knights, roosters and dragons. The Eels showed tremendous improvement each week and were unlucky not to freeze the game against the Knights.

Now, with their last two games against the Titans and Broncos, the Eels could still slip into that fourth spot.

It’s not just the finals the players have their sights set on, with the Rugby League World Cup fast approaching and battles galore as players jostle for Australian shirts.

The rear battle is my favorite, with several options including Tamika Upton, Sam Bremner and Emma Tonegato.

Sam Bremner has been the player of the competition so far and edged out Emma Tonegato on Friday night, heralding herself as the main contender for the Jillaroos Australian full-back spot.

• Monalisa Soliola made history by becoming the first person to score a try at the new Allianz Stadium.

• Both teams have had injury concerns with Holli Wheeler requiring scans on a collarbone and Sarah Togatuki struggling with a knee problem.

• Jocelyn Kelleher scored twice for the first time in her NRLW career.

• Jamie Chapman joined Tamika Upton and Kimiora Breayley-Nati as another Bronco who managed to score an NRLW hat-trick.

• Rikeya Horne scored twice for the Eels in their loss to the Knights.

See you next time

The opener of the next round will see either the Eels or the Titans pick up their first win of the season. For the Eels to keep their hopes in the Finals, it’s a must win, with their last game against the Broncos. The Titans are also out of contention, but have a bigger challenge ahead with their final game against the Roosters.

‘It’s true, apart from the made-up elements’: why people are lining up to sue Netflix performances | netflix