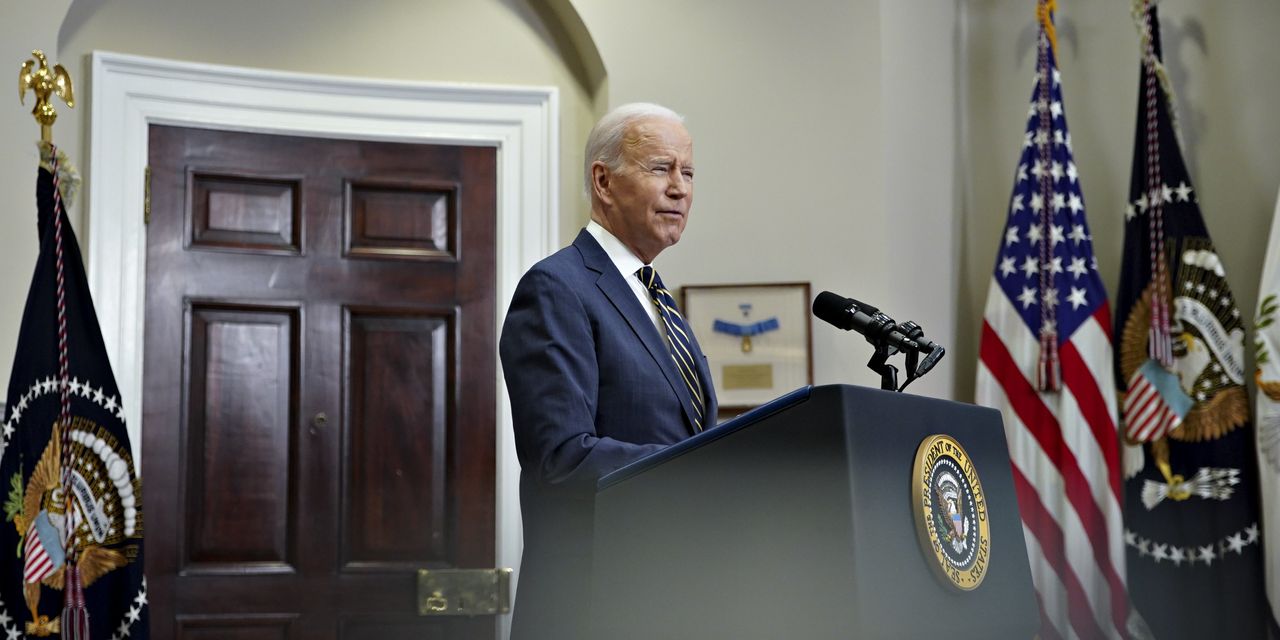 President Biden has said Russia will pay a ‘high price’ if it uses chemical weapons, amid growing fears among Western officials that Moscow will resort to deploying chemical, biological or nuclear weapons after struggling to make progress in the war in Ukraine.

“I’m not going to talk about intelligence, but Russia would pay a heavy price if they used chemical weapons,” Biden said Friday at the White House.

In a speech late Thursday, Ukrainian President Volodymyr Zelensky warned that Russia was setting the stage for such an escalation by baselessly claiming that the United States was funding biological warfare efforts in Ukraine.

Russia’s Defense Ministry said Washington supports research that could allow the spread of disease from wild birds migrating between Russia and Ukraine, adding that “biological laboratories established and funded in Ukraine have experimented with coronavirus samples of bats”.

The White House has dismissed the charges, saying the alleged use of biological or chemical weapons could mark Russian efforts to lay the groundwork for their own use of such weapons.

“It makes me really worried, because we have been convinced many times: if you want to know Russia’s plans, you should look at what Russia is accusing others of,” Zelensky said.

US officials declined to discuss what specific intelligence, if any, they have to indicate that Russia may be preparing to deploy chemical or other unconventional weapons in Ukraine. Officials said Russia has a history of employing chemical weapons, including using chemical agents to poison Putin’s domestic political opponents and encouraging their use in Syria by President Bashar al’s government. -Assad.

Russia’s accusations have been amplified by China, whose Foreign Ministry and state media have repeated them, and drawn a wave of denials from the United States and its allies, who warn that Moscow sows disinformation before a possible use of unconventional weapons in Ukraine.

“I will say it once: Ukraine does not have a biological weapons program,” US Ambassador to the United Nations Linda Thomas-Greenfield told the United Nations Security Council on Friday. “There are no United Nations-supported Ukrainian bioweapons labs. Not near the Russian border, or anywhere.

A senior US defense official told reporters on Thursday that there were five biological research labs in Kyiv that focus on protection against pathogens such as anthrax, botulism and tuberculosis. The United States has spent about $200 million since 2005 to support Ukrainian labs, work that began as an effort to help rid Ukraine of remnants of the Soviet biological weapons program, the official said.

“There are no (Pentagon) biological weapons labs in Ukraine or anywhere else in the world,” the official said. A second senior defense official said there were no US personnel at the five labs.

Russia presented its allegations of chemical and biological weapons work in Ukraine to the UN on Friday, calling for a special meeting of the Security Council.

The Moscow Foreign Ministry said it had circulated to the UN and the Organization for the Prohibition of Chemical Weapons, a Netherlands-based watchdog, a document that claimed “radical Ukrainian groups” under American control “have prepared several potential scenarios for the use of toxic chemicals”. in order to carry out various types of provocations.

At the Security Council, Russian Ambassador to the UN Vasily Nebenzya said Moscow had discovered signs of an “urgent cleansing by the Kiev regime of traces of a military-biological program” supported by US defense officials. He repeated Russian Defense Ministry claims about US experiments with anthrax, cholera and other pathogens and the use of migratory birds to spread disease in Russia.

US Ambassador Thomas-Greenfield in turn denied the allegations and accused Russia of recently using chemical weapons and maintaining a biological weapons program. She warned that Moscow could set the stage for using such weapons for assassinations, in “false flag” operations blamed on Ukraine or in tactical military operations on the battlefield.

“Russia is trying to use the Security Council to legitimize disinformation and mislead people to justify President Putin’s war of choice against the Ukrainian people, and China, too, has been spreading disinformation in support of outrageous claims by Russia,” Thomas-Greenfield said. .

China’s UN Ambassador Zhang Jun says Russia’s allegations are concerning and must be properly addressed, while accusing the US of ‘baseless accusations against China which we strongly reject’ .

Ukraine-Russia live updates: Putin in 75-minute call with Macron and Scholz on how to ‘end the war’; Russian forces advancing on Kiev; humanitarian corridors threatened by bombardments | world news

How video ad tech companies are becoming beneficial for advertisers