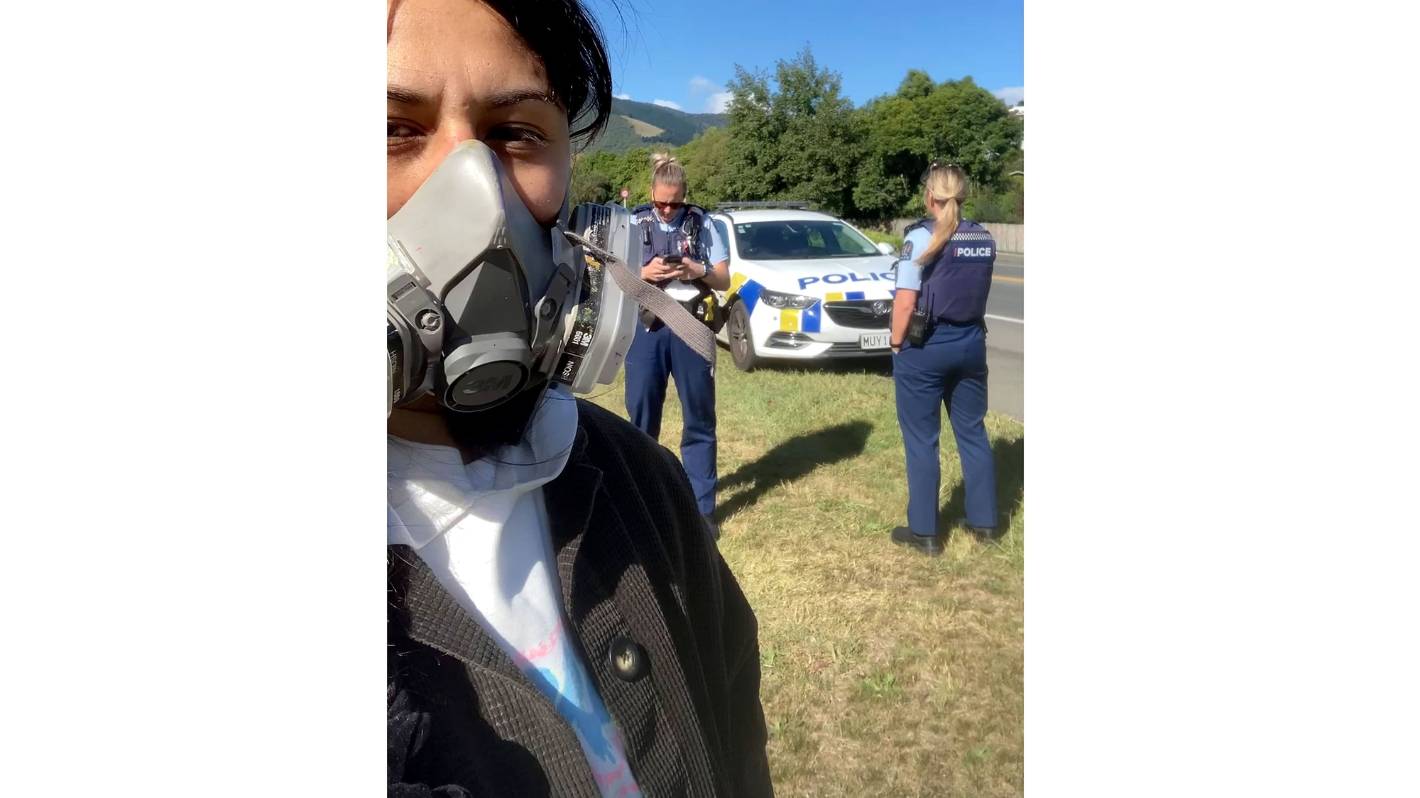 An artist says she was treated like a criminal after police were called while she was creating a street mural as part of a municipal art project.

Nerys Ngaruhe was painting a mural near Annesbrook Roundabout in Nelson around midday on Friday when she was approached by four uniformed police responding to calls from the public.

Ngaruhe was painting the mural as part of the Waihanga Whakatū Create Nelson project, which aims to boost creativity in the area and help engage people who would not be reached through traditional Nelson City Council processes.

The project is managed by OD&Co, which supports Nelson City Council in its arts strategy.

She finds spots targeted by taggers, taking their messages on board and creating luminous murals that combine taggers’ whakaaro (intentions) with Maori motifs and whakataukī (proverbs).

She was browsing one of these murals when the four police officers arrived in two patrol cars.

She said she tried to stay calm and told them she was cleared to work under the direction of the council.

She was shaking and trying to “hold on”. One of the officers told her that some of the graffiti was offensive, but she replied that it was clear it was artwork with an obvious message.

“Just the way they approached me, they surrounded me, four officers, two patrol cars stopped on either side of the road, a man and a woman got out, he approached me, he immediately said ‘what are you doing here?’

“It made me feel like a criminal. Like completely, 100%, like what I was doing was morally wrong, I should be locked up. Thinking about it, why should I feel like that. I’m doing this working to make my community safer and prettier.”

Eventually Johny O’Donnell, founder of OD&Co, was called in. Ngaruhe said he explained that she was allowed to do the job, and when he asked why the police didn’t believe his explanation, he was met with silence.

Ngaruhe has not returned to complete her work since Friday’s incident.

Police said in a statement they responded to calls from members of the public about someone painting graffiti on a wall.

“Officers present were able to establish that the artist and his work was part of the Waihanga Whakatu, Create Nelson art strategy. Police acknowledge that it took some time to confirm this.”

Inspector Vicki Walker, acting commander of the Nelson Bays area, has since spoken to O’Donnell and said the police are “fully supportive of the artist’s kaupapa and mahi (work)”.

“Both agencies are now working together to ensure this great work can continue and be celebrated with the community.”

Police did not respond to questions about the officers’ specific actions, which Ngaruhe described as “harassing” and antagonistic.

O’Donnell said Thing he could not comment on the actions of the police since he was not present, but also acknowledged his own part in the misunderstanding by not alerting the police to the project in advance.

“Looking at it now, we would have been better served to have kept police and other agencies informed about the work,” he said.

“It’s a courtesy to these agencies, but it’s also about keeping the artists safe – I never would have imagined this experience.”

He said he “wholeheartedly” trusts and supports Ngaruhe and his artistic kaupapa.

“We are a little disgusted with the experience as it is clearly not a pleasant outcome for anyone involved.”

He said the incident highlighted part of why the work was needed in the first place, as there were many people involved in the tagging or graffiti art who were not hired by traditional board outreach but had significant creative potential.

“Bringing people into the conversation who otherwise wouldn’t be heard means doing it a little differently,” O’Donnell said.

“With Nerys, it was really about acknowledging that there are young people in Nelson, who are ultimately the beating heart of the future of art in our city, and the conversations are happening in places that are theirs. inaccessible.”

People interested in contributing to the Create Nelson Waihanga Whakatū process can learn more about the i-Site, where there was a physical space dedicated to the project.

OD&Co will present its work to Nelson City Council in June to help shape the city’s new arts strategy.

The council’s managing director, Pat Dougherty, said the council had commissioned OD&Co to undertake the engagement and development of Nelson’s artistic and creative strategy.

“This involves seeking community feedback and how this is done is at the discretion of OD&Co, with the council trusting our partners to use appropriate methods to reach all audiences, recognizing that new methods or non-traditional may be necessary for hard-to-reach communities. .”

Protection against high-cost lenders in place May 1