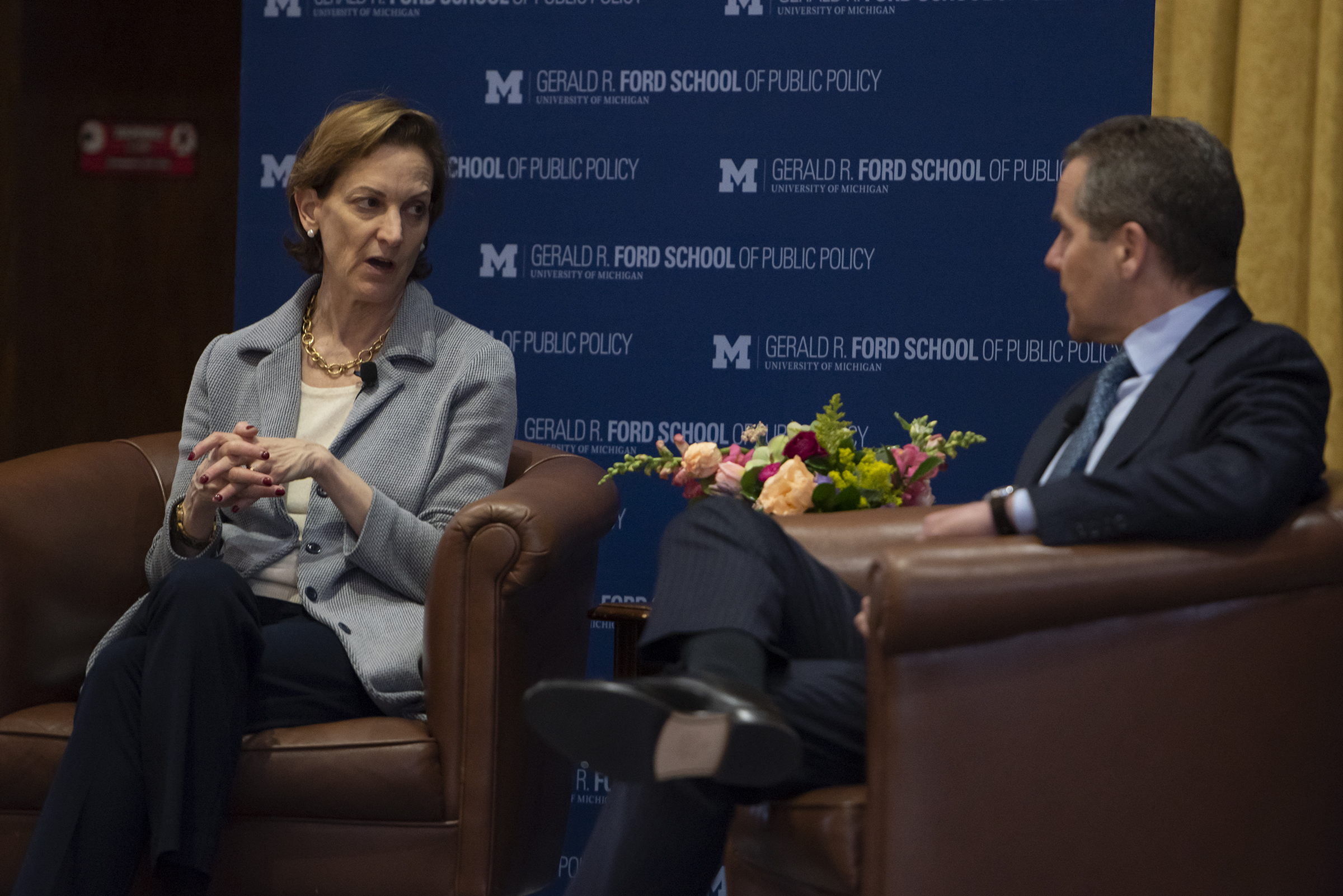 The Ford School of Public Policy hosted Pulitzer Prize-winning author and journalist Anne Applebaum at the Michigan League on Monday to discuss the challenges of democratic institutions and the role of the press in a conversation with Dean Michael S. Barr.

Offered in person and virtual format, the event titled “Twilight of Democracy” drew hundreds of attendees for the Ford School’s culmination”Democracy in crisisseries. Beginning in March, the series hosted four acclaimed journalists talk about threats to democratic systems in the United States and around the world. Applebaum, who specializes in geopolitics and the contemporary political landscape, is currently an editor for The Atlantic.

Barr started the conversation by asking Applebaum about him delivered “Twilight of Democracy: The Seductive Lure of Authoritarianism”, which explains how the lure of nationalism and autocracy paved the way for a new wave of authoritarianism around the world.

“Part of the right (in Poland) in particular, had come to different conclusions and decided that the system that had been built after 1989 did not reflect their views,” Applebaum said. “Part of the Republican Party has been disappointed with modern America. Part of the Conservative Party were disappointed with Britain, that the country was not what it had been or what they imagined it should be… So they attached themselves to new radical political movements.

Applebaum went on to explain how conspiracy theories such as birthism – belief in any discrediting claims that former US President Barack Obama was not born an American citizen – has fueled public distrust of government in Western democracies around the world.

“Each country has its own version: in Poland, there was a terrible Plane crash involving one of the former presidents and a huge body of conspiracy theories have been built around the plane crash,” Applebaum said. “The use of conspiracy theory to undermine public trust…in democratic institutions is something I’ve started to see happening in all Western democracies.”

Applebaum said right-wing nationalism and distrust of democratic institutions have led people to believe they must take extreme extrajudicial measures to regain control, as evidenced by the Jan. 6 insurrection and conspiracy aiming to kidnap Governor Gretchen Whitmer.

“Part of the (Republican Party) is rebuilding itself as a party designed to overthrow the American electoral system,” Applebaum said. “(The idea that) there is a plot to take away the votes of ordinary Americans and instead put in fake presidential candidates…it’s a way to undermine trust in institutions and give people feel that they have to do extrajudicial or extrajudicial actions, including violent actions, in order to gain power”.

The end of the session gave way to questions from the audience, who engaged in conversations about the role of the media in informing citizens.

“What do you think is the first thing journalists need to do so that when they report facts, they are believed and trusted? asked one participant. “And what can audiences do to be more aware of the content they are consuming?”

Applebaum responded by discussing the role of social media and selective reporting on violence and conflict for purposes of higher engagement.

“The push (for the news media) was toward stronger, angrier, more emotional writing, and that was coming from readers,” Applebaum said. “It also comes from the nature of social media… (Facebook) makes its money from advertising, it doesn’t make its money from building consensus or promoting better discourse or better conversations. And because journalism was connected to Facebook…it had a really negative impact on journalism.

Applebaum concluded by reminding participants that the decline in the quality of democracy is neither fatal nor predestined, and that the collective action of many individuals could make a difference in efforts against authoritarianism.

“Democracy is not inevitable, but dictatorship is not inevitable (either),” Applebaum said. “We all have agency and we all can affect the course of events…(something) that people who live in dictatorships don’t have…We take it for granted because we We’ve had it for 250 years with a few glitches in the middle, so it’s incumbent on all of us to be proud of the fact that we have (this ability) and to use this possibility.

Daily reporter Irena Li can be reached at [email protected]