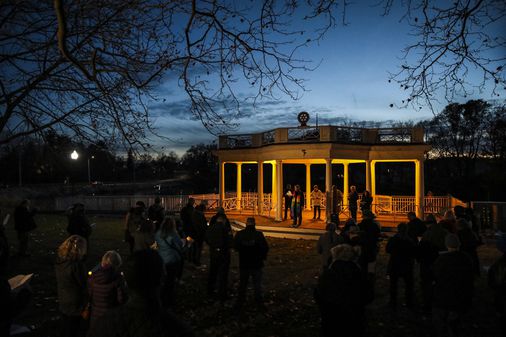 After more offensive graffiti discovered, Danvers says he will stop informing the public about hate speech

“Going forward, the city will no longer issue statement after statement whenever a similar incident is discovered and / or reported,” city leaders said in a prepared statement. “Our fear is that the constant attention created by doing this will just not encourage the same thing, which in some cases may just be attention seeking and in others may really be statements of hate aimed at making. difficulty.”

The statement was issued by Steve Bartha, the city manager; Gardner Trask, Chairman of the Board of Directors; Dutrochet Djoko, president of the municipal human rights and inclusion committee; James Lovell, the chief of police; Lisa Dana, the school superintendent; and Eric Crane, chairman of the school committee.

They did not say if or when they would stop hiding information about hate speech from the public.

“We will continue to document and investigate these incidents, communicate them to relevant authorities and local councils or committees, including the Human Rights and Inclusion Committee, work with all parties involved and take appropriate action depending on the circumstances, “the statement said. .

City officials said they would “continue to deal with these incidents, in partnership with Danvers Public Schools, the District Attorney’s Office, individuals and their families.”

Last week, a swastika was found drawn in a bathroom at Danvers High School. Previously, swastikas had been found twice on a bathroom wall at Holten Richmond Middle School.

In addition, the high school wrestling team was suspended indefinitely after a member of the team allegedly used racist language, triggering a fight with another student, and school officials discovered a group of equips Snapchat with “references to hazing and hateful and biased language.”

City officials have expressed frustration with the recurring incidents and the perception this has created in the community.

â€œWe have a lot of work to do to build relationships, engage in constructive dialogue and recognize that each individual is worthy of respect,â€ their statement said. “We will need the help of community leaders, civic groups and all those committed to working together towards a common goal of abolishing hatred, learning to celebrate diversity and just being kind to each other.” others.”

They said the city has sought help from the Lappin Foundation in Salem, the Boston Anti-Defamation League, the Essex County Community Foundation, the North Shore NAACP and others. The city is also recruiting its first director of equity and inclusion.

The statement also referred to actions taken by the school department to try to resolve the issue. The initiatives were presented at last week’s meeting of the Human Rights and Inclusion Committee.

Bob Hohler can be reached at [email protected]